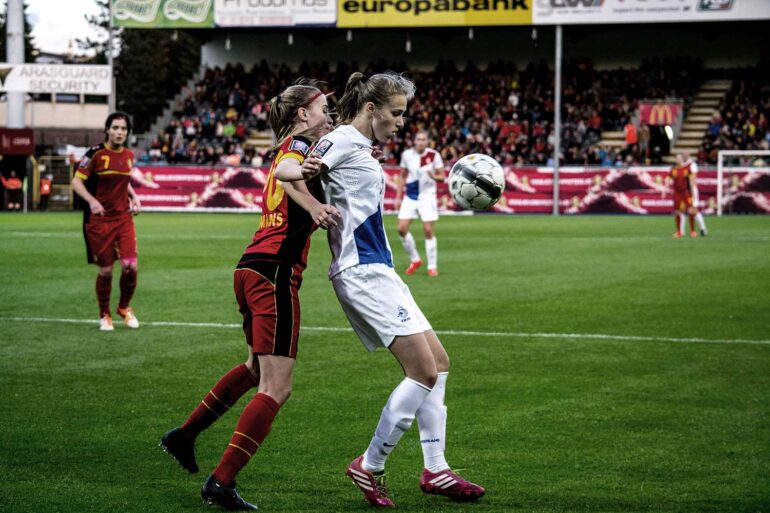 By StampMedia from Belgium (België - Nederland) [CC BY 2.0], via Wikimedia Commons

There are few footballers at the age of 21 who have the world at their feet quite like Netherlands striker Vivianne Miedema.

Born in Hoogeveen, Miedema has scored goals wherever she’s gone and her record for a player her age is quite remarkable.

In just 53 caps for her country, Miedema has scored 41 times, showing her prowess in front of goal. She scored more goals for her first club, SC Heerenveen, than games she played in before moving away from home.

But it all started for Miedema a long time before she made her Heerenveen debut. Like many, she was born with a ball at her feet.

“I always played football,” she said. “I always went to the football pitch, I loved it and it was just easy for me. I started when I was about 4 or 5 years old and I just never stopped.”

Her form in Holland and breakthrough into the Netherlands national team after a superb U-19s tournament earned her a move in 2014 to German giants FC Bayern Munich, and helped her side qualify for the 2015 World Cup.

Scoring all three goals in a playoff against Italy, coach at the time, Roger Reijners, described Miedema as having a “killer instinct” in front of goal.

And it appears defenders have started to take note of Miedema’s fearsome reputation, perhaps to the benefit of her teammates.

“I think teams have a lot of respect for me, in games they’ve put like three players on me and that just gives other players more room, so it’s fine by me!”

Such is the attention defenders have started to give the striker, she admits the squad have actually started using it as a logical tactic.

“We do work on that,” she said. “The first game against Norway they tried to crowd the middle, but we can play on the outside, we can play anywhere so we look to do that.”

Miedema is yet to find the net during the tournament, despite six points out of six, Sarina Wiegman’s side have only scored two goals in their opening two games.

But the 21-year-old isn’t worried, suggesting she and her teammates aren’t looking any further ahead than Monday’s encounter with neighbors Belgium.

“I don’t think we can say we’re happy with anything, we just have to see how it goes. Obviously, it looks like we’ll be play[ing] Sweden or Germany, which will be hard, but we have to make sure we get through and play like we did against Norway.”

She added, “We’re really happy with how we started, we played amazing against Norway — it could have been four or five! It’s just good to win, no goals against you, playing in the Netherlands in front of sold-out stadiums gives you a lot of energy.

It will also be a sell-out when the Netherlands walk out in Tilburg alongside rivals Belgium on Monday night. With nothing guaranteed in Group A, Miedema and her teammates could still bow out of the tournament if they’re defeated by Ives Serneels’ side.

But Miedema is prepared for a feisty encounter and knows Belgium will do everything they can to guarantee they qualify instead of their next door neighbors.

“On paper, Belgium would have been the easiest game for us but the standards in this group have been so high. Belgium need to win because I don’t see Norway beating Denmark that easy; it’s a derby so they’ll get something extra too, as will we.”

With all the talk in England surrounding last Wednesday’s “Battle of Britain” encounter against Scotland, Miedema admits Monday’s game has a similar feel to it.

“It’s the same as England versus Scotland for us. In football, it’s one of the biggest games for them and for us, it’s really important. When we play them it’s something special.”

Very few people would have tipped the Netherlands as one of the favorites pre-tournament. Placed in a tough group alongside Belgium, plus Norway and Denmark, three wins ensures a quarterfinal against Germany or Sweden.

But with an array of talent including five FA Women’s Super League players (six if you now count Miedema herself), confidence is flowing through the Dutch team who thrive on the underdog role.

“The fans have definitely helped during games but we have a good team and for us it’s good that nobody sees us as one of the favorites. We’re a good outsider and it’s going well. Hopefully it stays like that and everyone stays fit.

“The underdog role is fine, we’re under pressure at home but we don’t have that pressure to win the tournament. The pressure is on France, Germany, maybe England, it’s good they have that and not us.”

Such is the confidence flowing through the group right now, Miedema admits before the tournament they may have prioritized playing Sweden over Germany, but such is the closeness of the other three groups, the Dutch will take on anyone.

“We might have said we wanted to play Sweden more than Germany but I’ve watched their games and I don’t really care who we play now, if we have a good day I think we can beat anyone.”

The 21-year-old isn’t even fazed by the prospect of a potential semifinal against Mark Sampson’s England.

“We watched England, it’s hard to see how they actually are against Scotland. They played Denmark before the tournament, they have a strong squad and we know they’ve been working hard. They’re one of the favorites, if we play them it will be a really good game.”

Combining her age, her talent, and her position as main goal scorer in the Netherlands team, it’s only natural most of the focus from Dutch media surrounds Miedema and her fledgling talent.

She appeared on the front cover of Dutch football magazine Voetbal International before the tournament, along with several of her teammates, and she’s glad some other members of the squad are sharing the limelight.

“Before the World Cup it was totally crazy,” she admitted. “It’s good for me now we have other players who get attention so I don’t get all the pressure, but I don’t really care to be honest.”

Miedema has a strong record against Belgium, scoring twice in the three games she has faced them during her short career, so what chances she finally gets off the mark on Monday night?

“I would like to but I’m playing against three or four players all the time. In the last 20 minutes I’m the only one up front. I’m sure the goal will come.”

Like the rest of her teammates, whatever happens on Monday night, Miedema has recognized the excitement and importance surrounding the Dutch hosting their own tournament by the number of orange shirts out and about wherever the team go.

“It’s great to see so many people come out and celebrate and party in the city centers, it’s been amazing and I hope the further we go, the better it gets.

“We’ve been playing really good; women’s football is getting bigger here and hopefully we can continue that in the next few weeks.”