England Off to Strong Start after 6-0 Win over Scotland 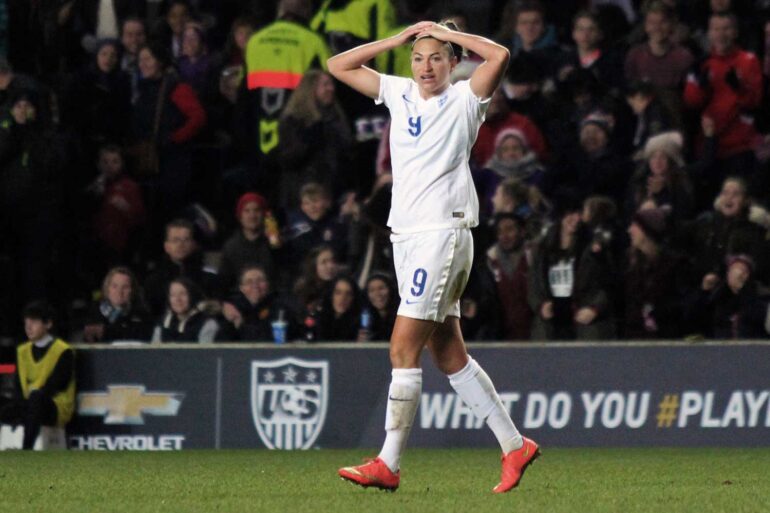 by joshjdss (England Women's Vs USA) [CC BY 2.0 (http://creativecommons.org/licenses/by/2.0)], via Wikimedia Commons

England opened up its Euro 2017 campaign with a convincing 6-0 win over Scotland in Group D. Jodie Taylor led the goal scoring with a hat trick, and Ellen White, Jordan Nobbs, and Toni Duggan all added to the record margin of victory. Richard Laverty is on scene and has analysis and reaction from the match. Laverty’s match report is here.

England Getting In Behind Scotland’s Defense Caused Endless Issues

It was a clear tactic early doors from England — with manager Mark Sampson choosing to go with just the one lone striker as opposed to two in recent friendlies, the Lionesses relied on the movement of Jodie Taylor up front to get the openings that were needed.

And the Arsenal striker didn’t let her manager down. She perfectly timed her run to get herself in on goal after just 10 minutes thanks to Jade Moore’s pass and some clever skill from Fran Kirby, who was tasked with playing in the No. 10 role.

Taylor constantly got in behind Scotland’s back four and her efforts were rewarded once again in the second half when she anticipated Ellen White’s knockdown to complete her hat trick.

Taylor said, “Maybe we worked on that a little bit, but I wasn’t expecting Fran to dummy it at all — I was just worried I was offside!”

All the talk pre-match for Scotland regarded the lack of Kim Little, but with plenty of talent still remaining in attack, Jennifer Beattie would prove to be the big miss for Anna Signeul when the game got under way in Utrecht.

While Ifeoma Dieke has a vast array of experience and Vaila Barsley is having a superb year in Sweden, the pair looked out of their depth together against the passing and movement of England’s front four.

For one of England’s six goals on the night, Dieke and Barsley both hesitated and looked unsure as to who should have been stopping Ellen White smacking home England’s third.

Anna Signeul said, “We played against a contender for this tournament but we knew it was going to be tough anyway. We are disappointed to lose so many goals but we will work on our resilience, but it’s not over for us.

“We will rise again because in three days’ time we are playing Portugal.”

England boss Sampson, though, did have praise for Signeul’s side.

“I thought in the first 20 minutes they caused us issues with their physicality and from set pieces. As much as tonight will hurt for them, they’re a very good team and it wouldn’t surprise me if they still come through this group.”

If you watch Manchester City in the FA Women’s Super League, you’ll be familiar with Jane Ross cutting a rather lone figure up top at times. Ross is a superb goal scorer and has excellent movement in and around the penalty area, but she doesn’t have the physicality of someone like Taylor or White to cause defenses issues.

From the first few minutes, Ross was cut adrift as Scotland’s midfield dropped deeper and deeper to help the defense try to stem the flow of England’s attacks.

Ironically, Ross would likely have had more luck in Scotland’s next game against Portugal, but is likely to miss the game after picking up a shoulder injury in Wednesday’s game.

Signeul said, “Unfortunately I think we might have lost another player today in Jane, she was one of our best on the pitch and that’s another tough blow for us.

“We don’t know for sure yet, she’s on the way to the hospital and we should know soon.”

If she should recover for either Portugal or the final game against Spain, Ross could use the lively Erin Cuthbert as a partner or at the very least get the influential Caroline Weir much closer to her.

Taylor came into the tournament after an indifferent year which saw her re-join Arsenal in 2016, but the striker didn’t play for her new team until the end of last season’s campaign.

Questions marks were raised about Taylor’s instant return to the England fold once she was fit again, but she proved her big-game worth once again against Scotland.

All three goals were taken by a striker full of confidence and it ensured Taylor goes down in the history books as the first player to score a hat trick for England at a major tournament.

She also became the first player from any country to score a hat trick at the European Championships since 1997 — 20 years ago this month.

Postmatch, Taylor said, “I wasn’t aware that I was the first to score a hat trick for England women; I’m just pleased with a solid performance and three points on the board.”

“She should take huge credit from her performance tonight, she always puts in a performance when we call upon her.”

As if we need telling by now, Jordan Nobbs once again proved pivotal and showed she’s England’s key player with a superb performance in Utrecht.

Nobbs was buzzing around the edge of the box from minute one, seeing an early effort deflected over before another effort went straight at Fay.

Nobbs played a role in several of the goals and her passing was, as ever, on point. Coming into the tournament off the back of a fantastic Spring Series for Arsenal, Nobbs finally got her goal with a sweet volley late in the game, and you could see the relief on her face.

Sampson did offer a brief comment on Nobbs’s form, but preferred to praise the team as a whole.

“Jordan’s been playing very well for us lately but the whole team has been doing well. I thought overall we were very efficient and we looked strong throughout.”