Lisa Evans and Scotland are Ready for Euro Challenge 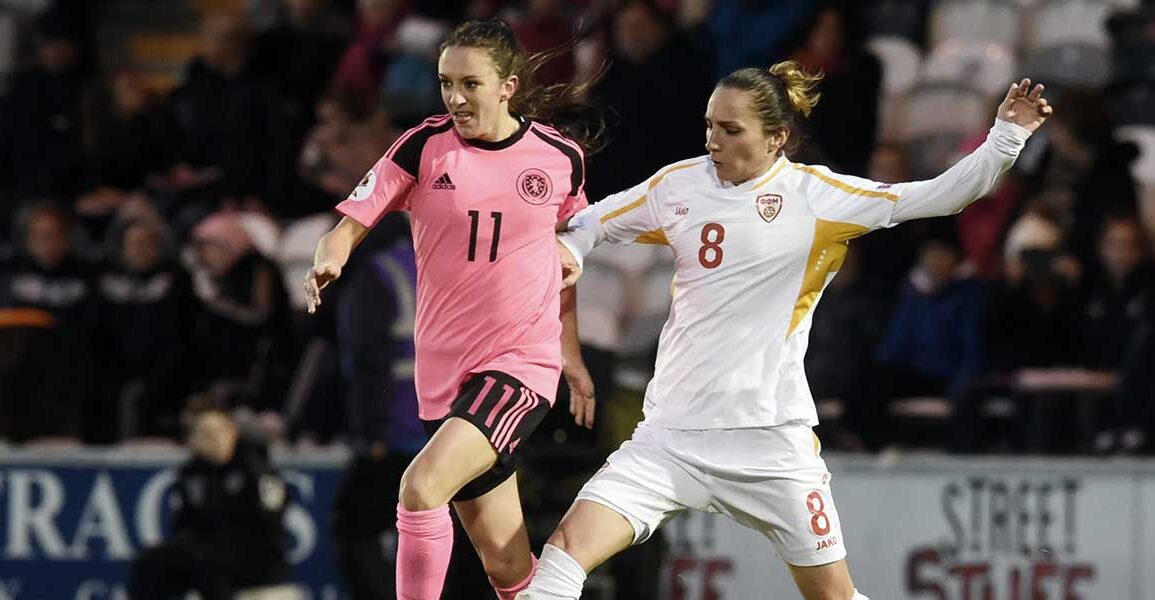 If you checked the history sheet, you’d be forgiven for coming to the conclusion that the Scotland team simply weren’t destined for qualification to a major tournament.

While coach Anna Signeul has undoubtedly changed the face of women’s football in Scotland, the Swedish-born 56-year-old could possibly have earned the tag of unluckiest manager in football before this year.

In 2009, away goals against Russia robbed Scotland of a spot at the European Championships, while an even worse outcome awaited them before the last tournament in Sweden.

With Signeul on the verge of guiding her side to their first tournament, to be played in her home country, Spain had other ideas.

Kim Little’s 98th-minute strike in the second half had seemingly put Scotland in control, only for a 113th-minute equalizer to tighten things up.

Though Scotland was still heading through on away goals, a missed penalty by Spain in the dying minutes seemed to confirm that fate was for once on Scotland’s side.

But a 122nd-minute winner robbed Scotland of their first major tournament, the reaction can be seen in one painful Youtube video…

Now, though, Signeul has finally led her team to the Netherlands and will step down after the tournament, and one of her key players for the three games coming up over the next week will be Arsenal Ladies attacker Lisa Evans.

The 25-year-old has seen most of the heartbreak over the past few years, but now all eyes are on doing themselves justice and forging a path for the next generation of Scottish youngsters.

And Evans, like many of her 22 teammates, has been through it all to get here.

She added, “We’ve worked so hard, so tirelessly. People have given up a lot, balancing work with football and with studies means it’s been a challenging year for many but we’re getting the rewards now.”

The first tournament for Scotland has been a long time coming, but the preparation hasn’t been entirely plain sailing.

Long-term injuries ensured two of Evans’ new teammates at Arsenal would miss the tournament in Emma Mitchell and world star Kim Little, while Manchester City’s Jennifer Beattie was also ruled out before the tournament.

“We have lost key players,” Evans admitted. “But we do have a really good squad; maybe the players coming in aren’t as experienced but they’re capable of doing a very good job.

“That’s why they’re here and why we’re all here, we’re all nervous but we’re unbelievably excited too. For many players, it’s probably the biggest game of their careers and it’s the biggest game in women’s football history for Scotland.”

So how much does prior failure motivate Evans and her teammates ahead of Wednesday night’s kickoff? According to the winger, the main satisfaction comes from knowing they are no longer the bridesmaid.

“You’ve got that amazement that you’ve finally qualified,” she said. “It was an emotional night when we found out we’d done it, for a lot of us we’re just living the dream.”

She went on to add, “It sounds like a big cliché but it really is unreal, I don’t think it will really sink in until we’re on the pitch.

“We watched the last World Cup at home and it can be really difficult, but we were here last night watching the first game and it’s just amazing to know that now we’re a part of it. I have no affiliation to Holland or Norway but the buzz of that first game was incredible.”

With fate for once on Scotland’s side, it couldn’t have thrown up a tastier opening to life on the big stage. Not only were Evans and her teammates thrown into Group D against neighbors England, it will be both side’s first match in Utrecht on Wednesday night.

Evans admitted it adds some extra excitement to the occasion, but is realistic about the job that they have ahead of them to come away with a positive result.

“England are one of the best teams in Europe right now,” she said. “They’ve come out here and said they’re here to win it and fair play to them.

“They’ve really developed as a team over the past few years. From our point of view, I think it’s about making sure we’re solid, counter-attacking well, and doing the basics — we have a lot of respect for England.”

Wednesday will also be a good chance for Evans to get acquainted with a few of her future teammates, the 25-year-old will embark on a new challenge in the FA Women’s Super League for the first time after leaving Bayern Munich at the end of last season.

“I always said I’d love to come and play in England; I spent five really good years in Germany and it was fantastic but it’s time for something new.”

That new will be working under Pedro Losa as the former dominant side of women’s football look to topple Manchester City and Chelsea at the top of the FA WSL, plus a return to Champions League.

With an ever-growing amount of quality in attack, Evans is relishing the challenge of competing with the best.

“It was the same at Bayern,” she said. “We had amazing players around every day but they’re the players you want to train and play with and it’s going to be no different at Arsenal.”

Though a number of big-name players, including Miedema, were released after a season in which Bayern also missed out on Champions League football, Evans confirms it was her decision to leave the club.

“I was still under contract with Bayern, I had the option to stay but it was an incredible opportunity Arsenal gave me.

“They’re one of the biggest and best in the world in terms of women’s football, they’ve had a few sticky seasons but I’m relishing the chance to help the team get back to where they were.”

Unfortunately for Evans, there’s still one small thing missing before she can relax and enjoy the full tournament experience.

“I picked up a Panini sticker book,” she laughed. “But I haven’t completed it, I haven’t even got my own sticker yet… ”