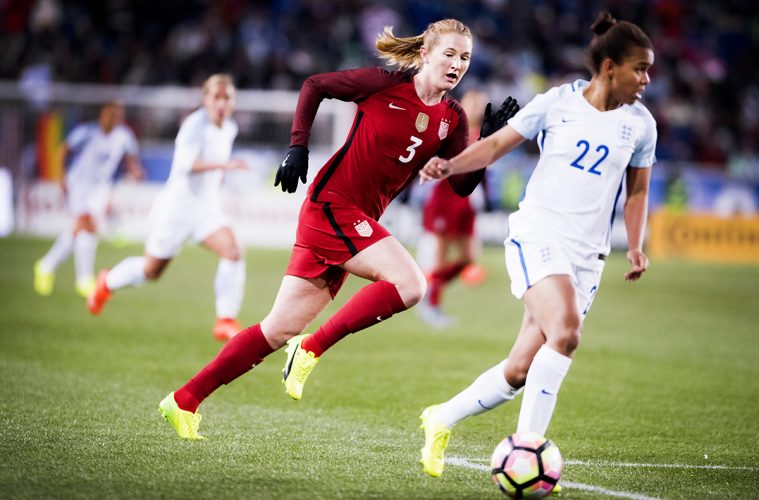 Ahead of the Euro 2017 finals tournament, Richard Laverty caught up with England winger Nikita Parris to discuss England’s preparation for the competition, as well as her overall improvement with Manchester City.

You have to be very good to impress England manager Mark Sampson, the Lionesses boss deciding only four new players were worthy of his squad for Euro 2017 that weren’t on the flight out to Toronto two years ago.

With 19 of those players still firmly in his plans, it didn’t leave a lot of room for changes but the omissions of Eni Aluko, Katie Chapman, Claire Rafferty, and Lianne Sanderson left a couple of opportunities on the table for those who didn’t make the World Cup roster.

Manchester City’s Nikita Parris had only been at the club for a few months — the flying winger joined on an initial loan deal from relegated Everton — when Sampson announced his first major tournament squad two years after.

As a 21-year-old, Parris was deemed still too inexperienced and raw to be relied upon on the big stage, but Sampson didn’t waste much time in making the Merseyside-born attacker a constant part of his plans shortly after her deal in Manchester became a permanent one.

Parris wasted no time in showing her new boss what she could do, coming off the bench to set one goal up on her debut against Serbia, before bagging two of her own against the same opposition just a few days later.

The now 23-year-old hasn’t looked back since — she is the youngest member of Sampson’s squad and can’t wait to embark on her first major tournament at senior level.

“It’s come around really fast,” said Parris. “I can’t wait to get to Holland, get into that tournament mind-set, getting into the hotel and onto the training pitch, and just being around the other teams we’ll be competing against.

“I’ve been in the squad a while now, ever since my first day I’ve felt right at home. I obviously know a lot of the girls well already but everyone’s been so welcoming, they’ve looked after me since the day I came in, and I hope I can repay them during the tournament.”

While inexperience for Parris is less of an issue than it was two years ago, there’s still a rawness to the winger’s end product.

The goals haven’t exactly flown in since joining Manchester City, but improvement in overall performance was noticeable during the recent Spring Series as Parris struck up a strong partnership with right back Lucy Bronze.

Either way, Parris has done enough to convince Sampson she’s ready to help England win Euro 2017, a show of faith that would boost any youngster’s confidence.

Parris said, “I’m really happy he’s got faith me, I’m the youngest in the squad so it was great for me to know that Mark was interested in me and I hope I can show everyone why in the summer.”

Regarding her partnership with City teammate Bronze, Parris admitted there is “familiarity” with the world-class full back, but says she’ll be comfortable playing with anyone should she be selected to start against Scotland on July 19th.

“Of course, I know Lucy well,” she said. “But I play in front of the likes of Alex [Scott] too and you’ve got Jade [Moore], Jo [Potter], and Fara [Williams], etc., in midfield so I have to make those connections too.

“We play in different teams all the time in training so we just have to make sure we find that continuity when the tournament starts.”

Despite a grueling 2017 schedule that saw her club side play eight Spring Series matches in quick succession, an FA Cup final at Wembley, and a Champions League campaign that took Nick Cushing’s side all the way to a semifinal encounter with eventual champions Lyon, Parris says there’s no burnout from the year so far for her or her teammates.

“There’s no burnout at all, we’re all fighting fit,” she stated. “We had a tough schedule at City but Nick mixed it up and everyone got rests when necessary.”

Parris added: “Nick was fully behind making sure his players were fighting fit and ready to help the England team.”

Four years on, the club has become a hotbed for young English talent and Parris is one of the players who appears to have really reaped the benefits of a move down the motorway to Manchester.

While more experienced players such as Steph Houghton, Toni Duggan, and Jill Scott were already seasoned internationals before joining the club, Parris doesn’t believe she’d be playing for England now if it wasn’t for City’s faith.

“City have been massive for me, without them I wouldn’t be in this squad,” she admitted. “As soon as I got to Manchester they told me I’d be an England international. The girls who were established already helped me settle in but the staff work tirelessly to make sure we reach our potential.”

With all the talking said and done and all pre-tournament friendlies reasonably well navigated by Sampson’s side, the next large point of focus is the first Group D match against Scotland.

Though one of her City teammates, Jennifer Beattie, is absent through injury, fellow attacker Jane Ross should line up opposite several of her club mates and Parris is relishing the opportunity to start with a win — something England haven’t done at a major tournament since 2005.

“I’m excited to face Scotland, you can call it a home derby but there’s so many people we all know. I’m sure it will be entertaining and it will be nice to come up against Jane, but we want the three points and the win.

Speaking about her injured teammate, Parris said, “I know how much hard work Jen put in to help Scotland qualify, she’s put a lot of time and effort in to be fit and be in the squad, and I know she’ll be massively disappointed.”

Should Parris line up in the starting eleven against Scotland next week, she’ll do so with the familiar No. 17 on the back of her shirt.

Parris wore the No. 17 shirt when she broke through at Everton and it’s a number she kept when joining Manchester City, and though it has special significance, there’s no superstitious benefit according to the winger.

“I’m not really a superstitious person but it was the first number Mo [Marley] gave me as a professional footballer.

“It’s memorable for me and my journey through football, City gave me the 17 shirt and England gave me 17 for my debut too.”