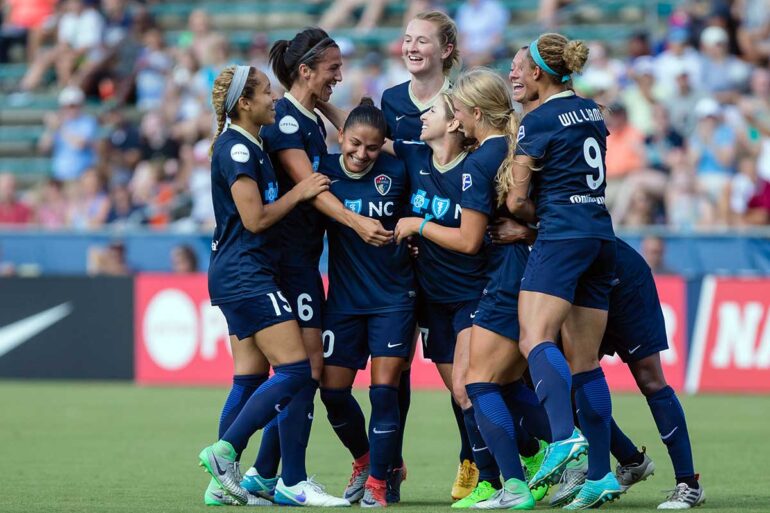 The North Carolina Courage defeated FC Kansas City, 2-0, at Sahlen’s Stadium at WakeMed Soccer Park in Cary, North Carolina, to improve to 6-3-0 and remain in first place in the National Women’s Soccer League (NWSL). FC Kansas City falls to 3-3-2 in week eight of the league.

North Carolina opened in a 4-4-2 formation with Taylor Smith starting in the right back slot after Yuri Kawamura suffered a season-ending ACL injury in last week’s match against the Chicago Red Stars. Debinha moved out to the right flank with Makenzy Doniak her opposite on the left flank. Up top, Ashley Hatch made her first professional start alongside Lynn Williams while Jessica McDonald was rested. Katelyn Rowland got her second start of the season in goal.

FC Kansas City started in 4-2-3-1 with Katie Bowen in the lineup for Alexa Newfield, who was suspended for this match after receiving two yellow cards in last week’s win against the Washington Spirit.

In a physical match that featured strong challenges from both sides, North Carolina pressed FC Kansas City early, pinning the visitors in their own half and forcing Kansas City to play long balls to relieve pressure. North Carolina, though pressing and maintaining most of the possession in the first half, took some time to settle into the spacing needed in switching from a three-back defensive line to a four-back and use its width and Debinha on the outside.

For FC Kansas City, the lack of a playmaker continues to be a problem going forward. The defensive shell makes the defense tough to crack but the Blues don’t get numbers forward in support of the lone front-runner, Sydney Leroux, and made defending easier for North Carolina.

The Courage were at their most dangerous with midfield Sam Mewis running at the backline. In the 5th minute, Mewis was given enough space to attack and slotted a nice ball between Kansas City’s center backs to Williams, who sent a left-footed shot near post that missed into the side netting.

Williams again was dangerous but just missed in the 27th minute. Taking a ball at the top of the 18-yard-line and peeling to the right, Williams fired a shot to the far post that went wide.

Complete chaos off a corner kick in the 40th minute almost resulted in a goal for North Carolina but Kansas City dodged some bullets when a redirected header by Abby Dahlkemper hit the post and then again after Kansas City defender Brittany Taylor’s attempted clearance of the rebound hit the post again but was then cleared.

In a foray forward in the 41st minute, Kansas City midfielder Lo’eau LaBonta drew the North Carolina defense with a run at the backline and then fed Leroux on the right. Leroux fired a strong shot on goal by Rowland made the save to know the ball out of bounds.

Despite maintaining the bulk of possession and shots on goal, North Carolina couldn’t find the back of the net and the score remained deadlocked at zero going into halftime.

Play resumed much as it had in the first half, with the Courage taking the initiative. In the 60th minute, the goal came. Off a corner kick, captain Abby Erceg headed the ball toward goal where McCall Zerboni flicked it past goalkeeper Nicole Barnhart.

The lead doubled in the 67th minute after Hatch scored her first professional goal. Williams sent a terrific curving and well-weighted pass in from the left that found the seam between the center backs and let Hatch run onto it for the finish.

Ashley Hatch scores her first professional goal to put North Carolina up, 2-0. That ball by Williams tho. pic.twitter.com/AviXVN1pMz

Kansas City gained more possession thereafter but only managed one shot on goal in the half.

The league will take a break next weekend for FIFA international friendly dates this week but will return the weekend of June 17 with a full slate of games on Saturday.

North Carolina remains in first place with the win and will stay at home to host Boston when play resumes. The loss leaves Kansas City at 3-3-2 and 11 points. The Blues will return home and face the Seattle Reign after the international break.

Kansas City’s Nicole Barnhart made her 300th NWSL save in the 30th minute, a league record.

North Carolina’s Katelyn Rowland made her second start of the season,