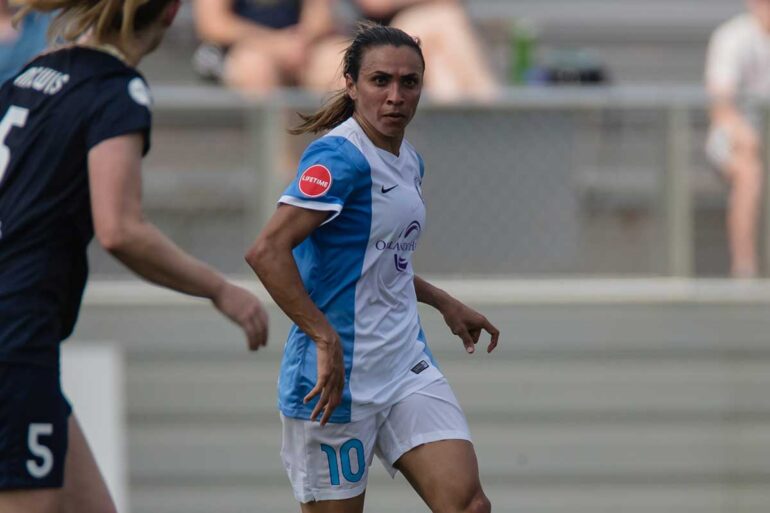 The Seattle Reign FC and Orlando Pride played to a 1-1 draw at Memorial Stadium in Seattle, Washington in front of a Sunday evening crowd of 4,037. With the point, Seattle moves into fourth place in the National Women’s Soccer League (NWSL) table while Orlando moves into eighth place.

Goalkeepers was the buzzword of the night in this one. Seattle Reign goalkeeper Haley Kopmeyer made an early save in the 9th minute after getting a hand on a Jasmyne Spencer cross that was aimed for Marta making a run down the center of the box.

In the 23rd minute, Orlando Pride goalkeeper suffered a non-contact injury after taking a goal kick and had to be withdrawn. Caroline Stanley, who was signed as a goalkeeper replacement last week after Aubrey Bledsoe suffered a concussion, was inserted and immediately tested on a Megan Rapinoe free kick. Rapinoe sent in an in-swinger that Jessica Fishlock got her head on, sending the ball far post. Stanley dove to knock it wide even though play was ultimately called offside.

The outcome wasn’t positive for Stanley in the 40th minute, however. Rapinoe sent in a cross from the right that Stanley punched out but not far enough. The ball fell to Rachel Corsie, who got a shot off that took a deflection that allowed Beverly Yanez to redirect into the goal to put Seattle up, 1-0.

Despite losing Harris and being down by one, Orlando came out of halftime in a positive posture and shape. Poor decision-making, however, led to the Pride finding the equalizer in the 52nd minute.

Reign goalkeeper Kopmeyer attempted to play a goal kick to Fishlock but Camila picked it off and Marta ran onto the deflected ball and slotted a left-footed shot to the far post to equalize. The goal game just after Kopmeyer made a strong save to her left to deny Marta’s curling shot from the top of the box that looked headed for the upper 90.

The game opened up after the equalizer as both teams looked to take maximum points rather than settle for a draw. However, the game-winner didn’t come in a match that was physical: four yellow cards were dispensed by Timothy Ford who blew his whistle 21 times for fouls committed by both teams.

Seattle travels to Houston to take on a Dash team coming off of back-to-back losses to Sky Blue, including this weekend’s 1-2 loss, in Lifetime’s NWSL Game of the Week. Orlando faces that Sky Blue team in New Jersey. Both matches on Saturday.