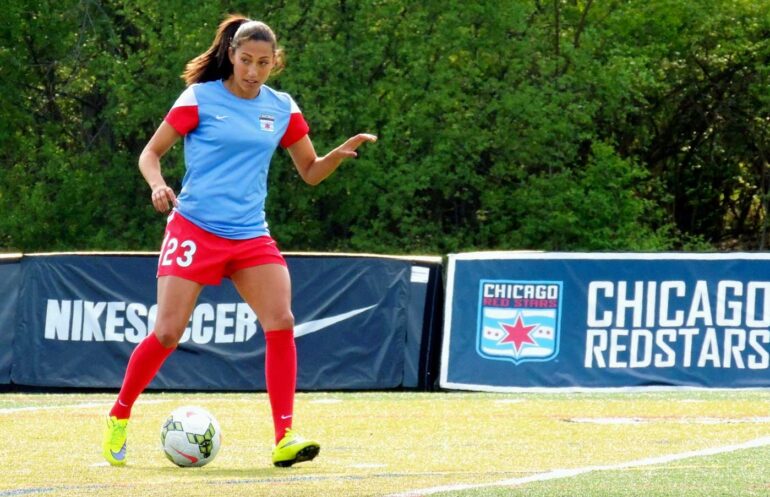 by Harvardton (Own work) [CC BY-SA 4.0], via Wikimedia Commons

The Chicago Red Stars got a late equalizer from Christen Press to draw the Boston Breakers at Toyota Park in Bridgeview, Illinois.

Chicago lined up again with Julie Ertz in a defensive midfielder role. For Boston, Amanda Frisbie made her first start for the Breakers in the midfield.

The Breakers started strong and almost put one on the board in the 22nd minute. Adriana Leon got on the end of a headed ball that Natasha Dowie kept alive and took the volley well but goalkeeper Alyssa Naeher also timed it well and was off her line to make the save.

The Breakers weren’t done. Rose Lavelle showed how good she was with the ball in the 32nd minute, taking the ball from before the midfield line and taking two Chicago defenders to her left before cutting the ball back and launching a right-footed shot that was blocked by Samantha Johnson. Lavelle was at it again in the 39th minute, again taking the ball from the center circle and racing up the middle of the pitch to get a left-footed shot off that was deflected wide of goal.

The score remained deadlocked at zero as the teams went into halftime.

Chicago’s Vanessa DiBernardo forced Boston goalkeeper Abby Smith into one of her three saves after launching a right-footed shot outside of the box that Smith had to dive to her right to save.

Boston’s goal came in the 69th minute from Lavelle again with far too much space in the middle of the pitch. Lavelle dropped a pass off to second-half substitute Margaret Purce, who drove into the box and got off a shot that the Chicago defense blocked. The rebound fell to Lavelle who launched a left-footed volley to the far post and well out of Naeher’s reach. It was Lavelle’s second professional goal (and on her birthday).

Lavelle scores (on her birthday) to put Boston up, 1-0. #CHIvBOS pic.twitter.com/F0xAwHfDrX

A rare occurrence happened in the 77th minute. Chicago’s Casey Short sent in a shot that caused Smith to leave a rebound in the box and potentially in the path of attackers. Defender Chapman got a foot on it and looked to be playing the ball out but Smith picked it up and the referee blew his whistle for an indirect free kick in the box.

The entire Boston teamed lined up on the goal line to defend the kick:

Christen Press took the kick and it looked like it might be a handball but no call was made and the teams played on.

Press would not be denied in the 89th minute after heading home a well-delivered Sofia Huerta cross for her first goal of the season.

The score remained knotted at one at the final whistle.

Chicago will head to North Carolina to face the Courage while Boston has a short turnaround with a game on Friday at home against Portland.