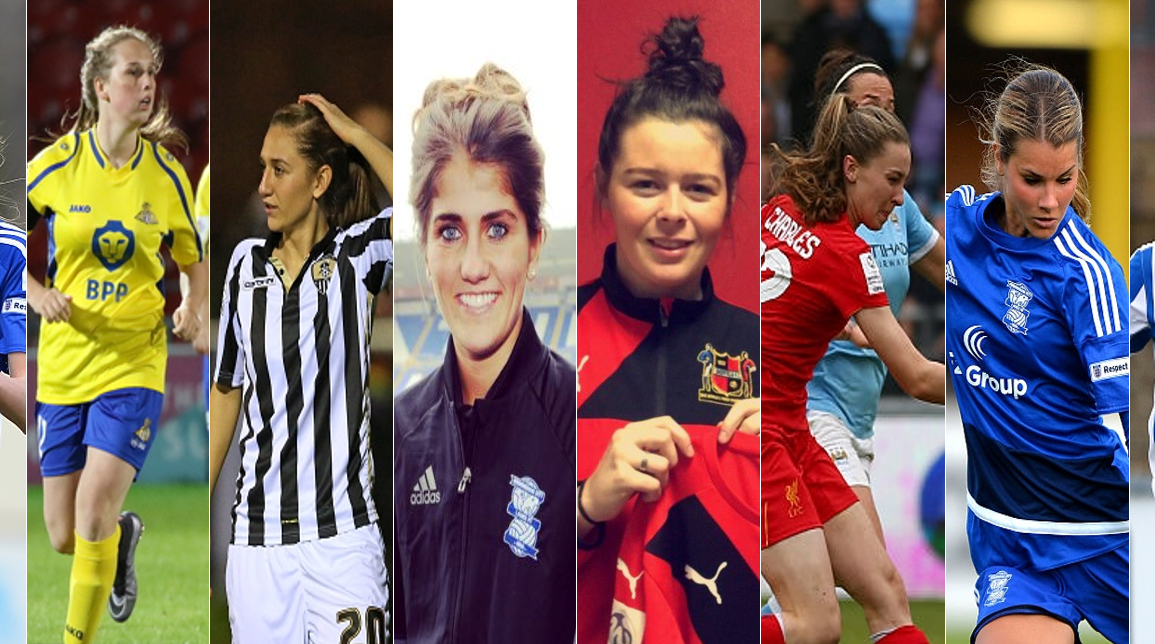 Tidbits from the England Women’s National Team, the FA Women’s Super Leagues (FA WSLs), and behind-the-scenes looks and commentary into women’s football in England, both on and off the field. Here, Rich Laverty picks his 10 to Watch in the FA WSL 1 and 2.

One of the coups of the winter saw young defender Maz Pacheco leave FA WSL 1 side Liverpool permanently in favor of regular football with Doncaster Rovers Belles. Despite the Belles relegation at the end of last year, Pacheco was one of the shining lights for Belles in the second half of the season and the club have managed to bring her in on a permanent basis. The left back is one of the best, young attacking fullbacks in the country and regular football in FA WSL 2 will do her no harm whatsoever.

“Maz is certainly a modern fullback who provides an exciting attacking element to her game. She is fearless, works so hard to get both up and down the pitch, and always wants to make something happen. She is still learning her role both in and out of possession but plays with such confidence. Another of our young players who has bags of potential.” — Emma Coates

With Birmingham struggling for goals at times in 2016, new boss Marc Skinner has swooped to add Emma Follis and Ellen White to his squad for 2017. While that may hinder any chance Ellie Brazil has of regular football this year, the Spring Series could still be a chance for the teenager to show what she’s made of after some impressive displays at last year’s U-17 World Cup in Jordan.

“A mobile, energetic forward who is mature beyond her years, Ellie possesses a unique ability to hunt the ball with minimum physical exertion and affects units rather than just individuals. Much to learn but has all of the attitude principles of a top player!” — Marc Skinner

Attacking midfielder Rebecca Rayner made her debut for the Belles last year when she was just 16 as Emma Coates began preparing for life in FA WSL 2. Rayner was trusted to start in the home game against Liverpool and showed no fear as she drove at the defense and showed the talent that sees her called up regularly to the England youth sides. Currently carrying a small injury, Rayner should become a key part of Coates’ thinking in FA WSL 2 once she’s fit and ready.

“Bex is an extremely talented, young attacking-minded player. She is a magician with the ball and is exciting on it, I have known and worked with Bex for several years now; she is becoming more rounded as a player and working hard in the process.” — Emma Coates

With Notts County manager Rick Passmoor favoring experience in recent years, Whelan has found regular starts hard to come by with Jess Clarke, Ellen White, and Rachel Williams favored in the attacking positions. With White having departed and Williams sometimes being utilized in a midfield role, Whelan should see her chances become more regular as she reaches the peak years of her career as well as signing her first full-time deal with the club.

“Aileen has been an important member of our squad, ever since we started here at Notts. Anyone can see the way she applies herself on the pitch. Aileen is incredibly tenacious and hardworking and this is not only on a match day but in training as well. Aileen has signed her first professional contract with us this season and, considering the effect which she could have on a match when only training on a part-time basis, we’re excited to see the heights Aileen can reach for Notts with a full-time training schedule behind her.” — Rick Passmoor

As a teenager, Williams was one of the best young defenders in the country and part of an impressive Everton side that made the FA Cup final in 2014. After leaving the club, Williams took the brave step of challenging herself in Italy with Brescia and Verona before expressing her desire to return to England this year. New Birmingham manager Skinner wasted no time in snapping up Williams who looks to be another shrewd addition to a very healthy Blues squad.

“A cultured player who has undoubted quality with and without the ball. A wonderfully strong character, who brings verve and energy to the group. Paige has an adventurous mindset, shown with her venture to Italy to challenge herself with the varied tactical approaches.” — Marc Skinner

Flint didn’t look entirely out of place with Manchester City when they began life in FA WSL 1 but soon Flint’s chances under Nick Cushing became less regular so the flying winger moved to Notts County in search of starts and minutes. It was just a flying visit as Flint soon moved onto Fylde and eventually Sheffield with Zoe Johnson putting her faith in Flint finding form again at Dronfield. If she does, Flint could be one of the players of the season in FA WSL 2.

“Last season we had some strong defensive performances but didn’t score as many goals as I would have liked. I felt we created chances but just didn’t convert enough and in the end, that cost us big points. A forward was my main target in the spring series before even thinking of strengthening any other areas, and much to my delight after meeting with Tash, she agreed to sign and bought into what we are about at Sheffield FC and I’m sure it will be a different environment to any club she has been at previously. She is only a young player but brings with her experience of a higher level and international experience, she has showed in training she is versatile, strong, and technically gifted; everything comes so natural to her and we are hoping she can now show that in games when it matters most.” — Zoe Johnson

Despite her young age, Charles made her FA WSL bow for Liverpool as Scott Rogers shuffled his pack during 2016. Her performances at youth level ensured she was a key part of England’s U-17 squad for the World Cup in Jordan last year and with Liverpool lacking a top class No.9, the Spring Series could see Charles get more chances before Rogers looks for a new signing in the summer.

“Niamh is a fantastic talent and if she continues to develop at the current rate, then I have no doubt that she will go on to be a full senior international for England. Niamh is working extremely hard to achieve her goals, although we are keen to protect her and not put any added pressure on her. We have every confidence and belief in her ability to play in WSL 1 even at this young age. It’s a very exciting time for Niamh and the club with the amount of talented young players that we have here.” — Scott Rogers

Maybe not the most well-known Hegerberg in football but Andrine has all the qualities to be one of the best players in the FA WSL this season. In La Manga she showed her range of passing quality against both England and Sweden, linking up with her sister Ada against the Lionesses. She didn’t get a real chance to show what she can do toward the end of last season but with the likes of Ellen White and Emma Follis now in front of her, 2017 could be the year we see Andrine spring to life in England.

“I am really excited to work with a player of Andrine’s quality. Deadly set-piece delivery, a player that can put the ball exactly where required. A consummate professional who always looks to push the boundaries of her skill sets. Exciting young talent.” — Marc Skinner

Teenage attacker Alessia Russo made a brave choice over the winter to step away from a top team in Chelsea in pursuit of regular football with newest FA WSL side Brighton & Hove Albion. Russo has continually shown why she is one of the highest-rated footballers in the country for Chelsea’s development side and the England U-17 side, scoring against eventual champions North Korea at the U-17 World Cup last year. Russo’s time at Brighton got off to the best possible start and it will be fascinating to see how she grows over the course of the next 18 months.

“Alessia Russo is a player that I have seen score hat tricks against us when she was at Chelsea, so when she became available to sign we had to move fast to secure her services. A natural goal scorer, she has the ability to play anywhere in midfield or up front and will be a wonderful addition to the squad.” — George Parris

Maybe the best signing of Willie Kirk’s managerial career — certainly the best signing of the summer during the break in FA WSL action last year. Claire Emslie joined FA WSL 2 side Bristol City without much of a reputation but a hatful of goals later, Emslie was one on the tips of tongues as she helped Kirk’s side return to the top division. It wasn’t just her goals that caught the eye, it was the manner of them and her ability to do it under the utmost pressure as Bristol chased promotion. Undoubtedly the one to watch this year, not just for her quality but to see how she gets on in FA WSL 1.

“We’ve done very well keeping Claire at the club as there was a lot of interest in her from other WSL 1 clubs as well as across Europe. She made a fantastic impact last season after she had arrived in the summer and I expect her to have an impact in the Spring Series. Obviously it’s going to be a big step up, but she will still give defenders from every club a tough time. I’m hoping that playing against the top teams between now and June, will increase her chances of being included in the Scotland squad for the upcoming Euros. She certainly wouldn’t let them down, and I’m excited to see what she can do against Bronze, Scott, et al., over the coming months.”  — Willie Kirk