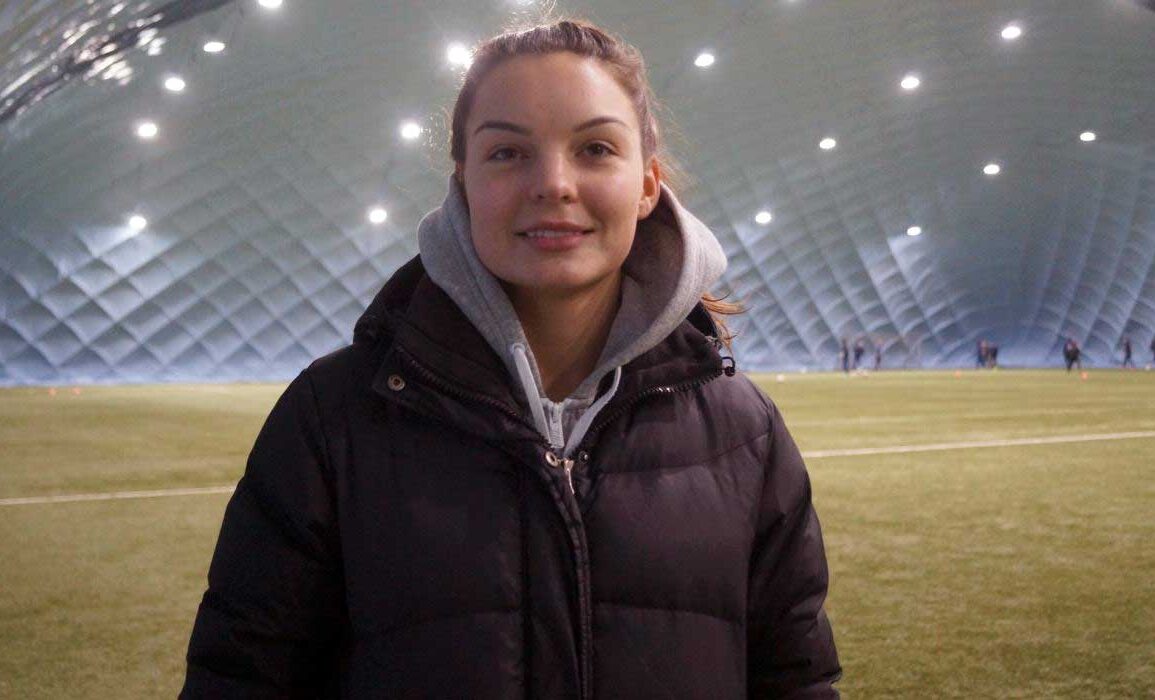 Editor’s note — Translation provided by the author, and has been editor for length and clarity.

“I felt like when you get a chance like this, that you have to take it.” — Johanna Rytting Kaneryd

Preseason training in Sweden started in early January. There’s plenty of snow and ice on the ground, and soccer pitches peacefully await March and the arrival of spring.

Rytting Kaneryd played all 22 games for Djurgården last season and was the league’s rookie of the year but was unable to attend the season-ending awards ceremony because she was on duty with Sweden’s U-20 team competing in the World Cup in Papua New Guinea.

I met Johanna Rytting Kaneryd, a 19-year-old midfielder from Damallsvenskan side Djurgården IF, in a huge tent her club has raised on the sporting grounds of Hjorthagens IP. It’s the same tent that crashed in early November last year, when the season’s first snow weighed too heavy on the roof. Luckily, that happened in the early morning hours and no one was harmed.

“It all started when I was invited to a regional soccer camp. I played for my local team then,” she said. “There was a guy who saw me play and thought I was interesting and he helped me. And it was actually there where it all started. He contacted some other teams and I could do a training with Tyresö FF. They even took me on a trip to a training camp and offered me a four-year contract, two plus two.”

It’s not easy to move away from home when you’re 15 years old, to leave behind parents and a brother, but Rytting Kaneryd told me she lived with a family in Stockholm who welcomed her like a member of the family. (Swiss international Ramona Bachmann left Switzerland when she was 15 to continue her development as a player in Umeå, a team that featured Marta at the time.)

But Tyresö was a team on the rise. And the opportunity was unique though the team’s stacked roster left Rytting Kaneryd on the outside looking in in terms of playing time.

“I felt like when you get a chance like this, that you have to take it,” Rytting Kaneryd said. “I was aware of not playing much, but at the same time, I knew that I would improve a lot in all those training sessions.”

Going into the first training session as a teenager was tough but Rytting Kaneryd tried to not let her nerves get the best of her.

“I did not think that much about it,” she explained. “I just went in and tried to show myself from my best side. Then, of course, I saw what players I was with. My self-confidence was not the best and sometimes it was tough, because I felt a lot of pressure that I felt obliged to perform extraordinary well. Those players don’t consider that you are much younger than they are. And today, I guess, I am the same.”

Tyresö crashed into bankruptcy in 2014 and after, Rytting Kaneryd played one season for second division team Älta. It was a year she doesn’t describe as especially successful — she was injured and didn’t develop her game much.

Then Djurgården was promoted to the Damallsvenskan for the 2016 season, and their new manager, Yvonne Ekroth, who had coached her on Sweden’s U-17 national team, wanted Rytting Kaneryd on her roster.

Rytting Kaneryd signed with the club and played in all 22 of the club’s games. It was a chance to play and bounce back from a difficult year in 2015.

“My expectations for that year [2016] were to not getting injured and to develop my game. And play as much as possible and that happened,” she said.

She is a speedy midfielder who prefers to play centrally, but plays on the left wing for Djurgården. In the eight home matches for Djurgården I was at, Rytting Kaneryd found herself in several 1-v-1 situations.

“Well, maybe I am just looking for those situations,” she joked. “No, I think that because I am fast, they try to stop me and engage me.”

Djurgården had an amazing start of the 2016 season and was fourth in the league table temporarily, but faded in the last third of the season and dropped to sixth. Rytting Kaneryd posited the drop might have to do with getting complacent.

“I really don’t know,” she said. “Maybe we got a little too comfortable? Well, no, I think the reason is that our opponents read our game a lot better. They knew we wanted to play possession-orientated and tried to disturb us. Maybe it is that, in the beginning of the season we surprised them.”

In November 2016, Johanna traveled with Sweden’s U-20 team to Papua New Guinea for the World Cup. The trip just to get there was a long one, and the team was somewhat restricted.

“It was a long trip. It took 30 hours and we had to change planes three times. It is another world, and I have to admit that I had not heard of the country earlier. It took some time to adjust to the time, the climate, many things were different.

“Unfortunately, we did not see much of Papua New Guinea since we were not allowed to leave our hotel. When we went to training sessions or our matches, we were escorted by police. The glimpse we got to see was when we were on the bus between the airport and the hotel. The audience, however, was very kind and friendly, and I remember the huge crowds at our games.”

Rytting Kaneryd saw minutes in all three group-stage matches and scored against Papua New Guinea: Sweden lost its first game against North Korea, 0–2, won against the host nation, 6–0, and finished with a draw against Brazil, 1–1. North Korea won the group and Brazil went through to the quarterfinals on goal differential, sending the Swedes home.

As Djurgårdens’ season looms, Rytting Kaneryd will be focusing on sharpening her game with an eye toward possible opportunities with the senior national team.

“I want to try to look for situations more upfront and get sharper than I was last year when I missed chances,” she said. “That is definitely something I am going to work with. I would like to play central, but at the same time, I understand that my speed is probably getting more effect on the wing.”