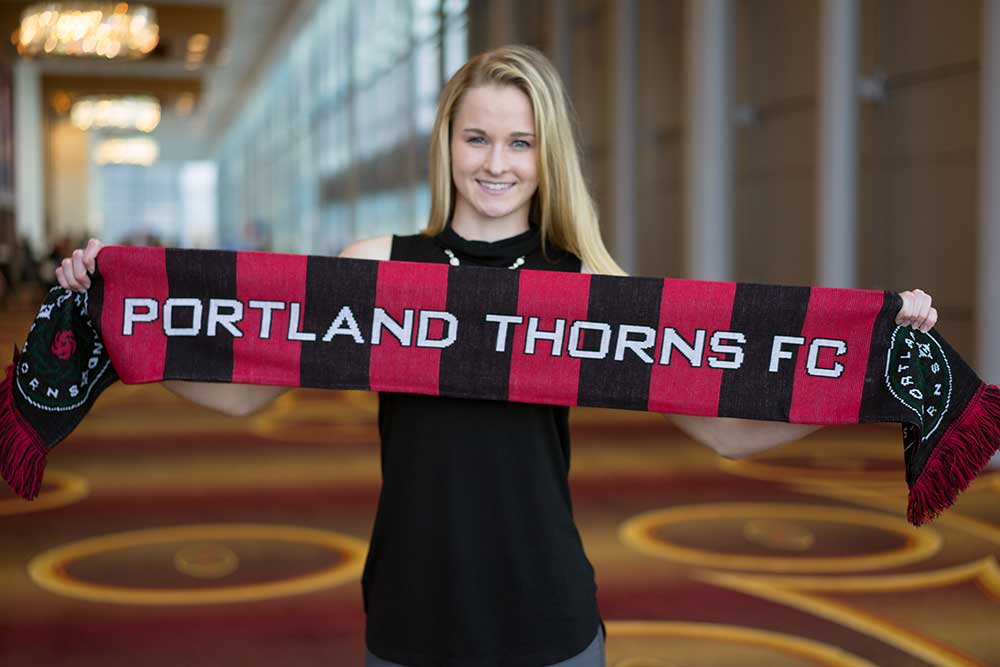 The Portland Thorns FC drafted for the now and the maybe. Head Coach Mark Parsons continues to mold and reshape the Thorns’ roster in an effort to fortify the team for Euro absences and another postseason run.

UPDATE: On January 18, 2017, the Portland Thorns traded Rachel Hill to the Orland Pride in exchange for a natural first-round pick and a fourth-round pick in the 2018 NWSL College Draft.

Head Coach Mark Parsons operated at peak Mark Parsons Draft Day mode during the draft. He was shuffling picks left, right, and center, and not just looking at the picture for the coming season but for the 2018 and 2019 seasons. That mentality is reflected in the Thorns’ picks. Rachel Hill is coming off of an outstanding four-year career at UConn as both a forward and an outside winger. She was one of the Huskies’ most consistent players on the field and finished every season scoring in the double-digits.

The same can be said for Tyler Lussi, who smashed nearly every record while at Princeton (which is saying something when you pass Diana Matheson and Jen Hoy in those categories). Lussi also brings a physical mentality to her game, though that is something you might not think given she’s not one of the bigger or taller players out there. But every match in the Ivy League is a battle and no doubt Lussi will be ready for this league.

Savannah Jordan was a selection meant for the future; Parsons stated as much in post-draft comments and after his one-on-one session at the NSCAA Convention. Jordan will be playing in Europe this season. So it may be a while before we see the heralded striker from Florida, but one never knows. She could come back her with European seasoning under her belt and if she does, she has the chance to take this league by storm.

Flynn has some experience at the U-23 level and is a year removed from her best statistical season at Nebraska, where she scored five goals. She could provide some depth in the midfield as a possible mid-year call-in when the Thorns will lose three players for the Euros.

To take a phrase from the NBA’s Philadelphia 76ers: You have to trust the process. Now in year two, Parsons is continuing to mold this unit. To be fair, it would be very hard to see any of these players step into a starting role right away but there is a definite possibility Hill and Lussi will be kept on. The roster currently stands at 19 players but a change or two being made prior to the start of the season will allow Hill and Lussi to make the team. In doing so, both will have time to learn from a lot of the experienced players on the Thorns’ roster and if they can reach their targeted potential, the Thorns will then have had themselves a strong draft day.

Tyler Lussi talks about being drafted and what Portland fans can expect from her.