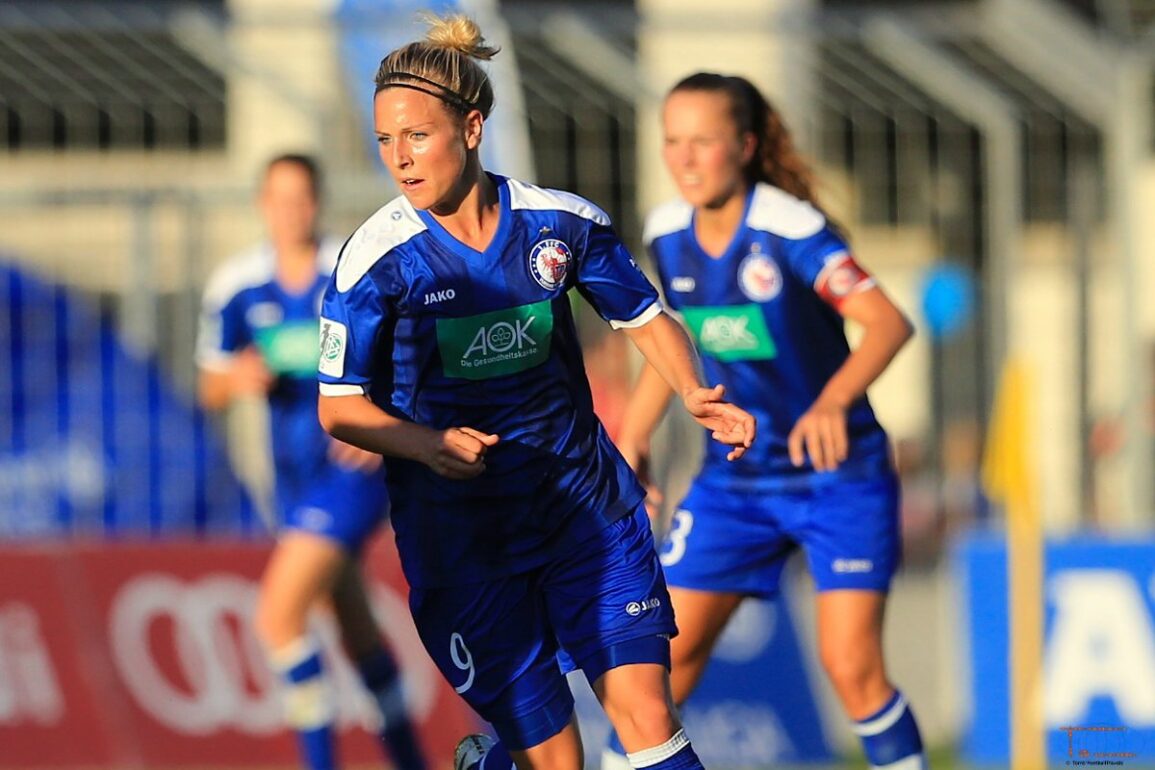 Also featured in this piece: fixtures that have been moved forward due to the FIFA U-20 World Cup that’s coming up. VfL Wolfsburg hosting Turbine Potsdam and Bayer 04 Leverkusen welcoming Borussia Mönchengladbach is originally from gameday 8. I attended the prestigious duel between Wolfsburg and Potsdam and offer my thoughts. Full gameday 7 review below as well.

After dropping points against FFC Frankfurt a couple of days ago, Die Wölfinnen were motivated to overcome “Spitzenreiter” Turbine Potsdam. The duel between Wolfsburg and Potsdam has turned into a fiery prestige duel over the years and is always special — therefore, I was glad I got to attend. DFB rescheduled the game to a Wednesday evening at 6pm. Not very ideal for people like me who usually work until 8pm. People who went to this game with high expectations were let down though. Most of the action happened in midfield with both teams not creating very many chances. The green side had a slight advantage though and managed to break through Potsdam’s defense a few times: Tessa Wullaert, Ramona Bachmann, and Alexandra Popp all had chances but missed. Potsdam defended very well and didn’t make it easy for Wolfsburg, giving Ralf Kellermann’s team very little space and keeping it compact. The Wolves had trouble building up play due to Potsdam’s constant pressure, early attack when on the ball, and not shying away from 1-v-1 duels or tackles.

And whenever Wolfsburg’s defense tried to bring some peace into the game by holding the ball, Svenja Huth forced them to play the ball quickly. A very active game by the German international in general; incredibly hard-running and hard-working offensively as well as defensively. Her pace sometimes forced Wolfsburg to take her down with a tackle, which created chances for Potsdam. Tabea Kemme was rested and Huth didn’t receive the support she would’ve needed to initiate a good attack. Final passes were missing but that was also because Wolfsburg did the same and defended with all the players they had. An usual picture. Wolfsburg were lacking a solution while Potsdam were cool as ever waiting for their chances. This is the Turbine Potsdam everybody used to fear back in the day. Glad to see that the Bundesliga legend is doing so well again. No matter where they end up at the end of the season, that was some great play and you can see one hell of an improvement.

Eseosa Aigbogun brought the lead for Potsdam in the 63th minute after taking advantage of a mistake by Almuth Schult. The German goalkeeper went to clear a corner but crashed into teammate Babett Peter while trying to clear Aigbogun’s header. That’s when the game became more and more hectic. Wolfsburg tried everything they had to be more creative and make runs forward, but Potsdam were ice cold and managed to save the 1-0 lead over time.

It looked as if Borussia Mönchengladbach would be able to collect their first win in the Frauen-Bundesliga. Kelly Simons marked the lead for the guests in the 65th minute after a great solo effort. It was Gladbach’s first real chance of the game while Leverkusen had plenty but couldn’t make use of any of them. Bayer haven’t won a single game in front of their own fans yet. A crowd of 203 were in for a real treat when the game turned into a sensational race to catch up. Ramona Petzelberger converted a direct free kick in the 77th minute. Bitter for Gladbach: Rebecca Knaak marked the 2-1 lead for Leverkusen in injury time.

Dutch international Vivianne Miedema helped the current reigning Bundesliga champion collect three points yet again. Miedema has started every single game so far and this is the second time she scored the only and winning goal. It was a tight match against Hoffenheim, who only had one single chance in the first half but managed to defend well against Thomas Wörle’s team except when Miedema was allowed to take a shot on goal from the penalty area. It is well known that if you give the striker space, she will most likely make you pay for it. Hoffenheim tried to be more present and focus on counterattacks in the second half, but couldn’t generate solid chances through their buildup. But the courageous fight against a decimated Bayern roster was not rewarded. Munich have to compensate for quite a lot of injuries, with Melanie Leupolz and Verena Faißt being the most recent ones.

Frankfurt seem to like adding some drama to their games! Once again, Matt Ross’ team was able to come back from a goal down. Frankfurt had the more dominant start in the game and therefore it was a surprise when Francesca Weber brought the lead for Leverkusen in the 16th minute with a screamer of a goal — definitely a goal-of-the-month contender. She just took the risk from 25 yards away and smashed the ball into the net. It didn’t take FFC long to react, though, as the fully recovered Mandy Islacker equalized just six minutes later. Yuki Nagasato put Frankfurt up front in the 32th minute. Bayer were too careless and allowed to Frankfurt to take control of the game. But despite being down a goal, Merle Barth got sent off with a straight red card after just 59 minutes. A huge disadvantage for Thomas Obliers’ team. Islacker collected her second goal of the day shortly after in the 60th minute. Leverkusen tried its hardest and went into full attacking mode despite being down a goal and player. Henrietta Csiszar made it 2-3 in injury time. But all possible hopes of taking a point out of the game were destroyed by youngster Nadine Anstatt who brought the final result and made it 4-2 in the 92th minute.

A tough defeat for Inka Grings’ team while SC Sand celebrate their highest victory in the Allianz Frauen-Bundesliga ever. Duisburg managed to put up a great fight against Sand in the first half and even had chances to take the lead, but it was Cecilie Sandvej who scored the first goal of the game and brought the lead for the hosts right before half time. For some reason, Duisburg completely broke down during the second half. They stopped fighting and resisting, and couldn’t keep up with Colin Bell’s team anymore. The DFB Pokal finalists of last year were absolutely ruthless and literally started a firework of goals. Dominika Škorvánková with the 2-0 lead in the 48th minute, Anne van Bonn made it 3-0 just four minutes later. Laura Feiersinger increased the lead in the 65th after a lovely played combination between Milena Nikolić and Nina Burger. And to add to the bad luck, Julia Debitzki made it 5-0 with an own goal two minutes later. Duisburg were helpless and became more hectic, failing to defend against Verena Aschauer who marched through the penalty area to add one more to make it 6-0. MSV head coach Grings admitted that the final score was well deserved. MSV Duisburg need to work on their will. If you stop defending and playing football after 40-50 minutes, you shouldn’t be surprised that a team like Sand gladly takes advantage of it. Seems like Duisburg can’t compensate for its long list of injuries. Here’s hope that the team can unite and fight back.

Jana Feldkamp’s goal in the 37th minute brought Freiburg their first loss of the season and helped Essen keep connection to the top league. It was an even game during the first half with both teams creating good and promising chances. Freiburg had a slight advantage when it came to possession. Slow and thoughtful buildup of play resulted in a couple of chances but Essen keeper Lisa Weiß had a good day and was able to neutralize. It was Feldkamp on the other side who netted in after a corner that Freiburg were unable to clear. Jens Scheuer’s team put up a great fight in the second half but were lacking penetration power. Notable: Freiburg lined up two 17-year-olds, one 18-year-old, and a 15-year-old. Focusing on and giving young talent a chance to shine and grow in the Allianz Frauen-Bundesliga is the way they want to go.

USV Jena and Christian Franz-Pohlmann decided to part ways last week. Assistant coach Steffen Beck took over as interim coach for and faced Turbine Potsdam in his first game as head coach — certainly not an easy task, especially since Matthias Rudolph’s team beat VfL Wolfsburg a few days prior. Potsdam were confident as ever and took the lead after a well-played counter attack. Elise Kellond-Knight shifted the ball to the right side where Eseosa Aigbogun was waiting. Aigbogun tried to pass the ball to Svenja Huth but Jena defender Jana Sedlackova was paying attention and managed to control the ball. But instead of clearing the situation, she started dribbling toward Jena’s goal. Huth was making the run and managed to win the ball and net it in. As mentioned earlier: that’s exactly what Potsdam tried in Wolfsburg. This time, it worked, with Huth rewarding herself for an outstanding performance again. She’s always wide-awake. Beck’s team tried to play more courageous but wrong passes in the movement forward prevented them from taking something countable with them. These are the mistakes that keep following them through the ongoing season. It will be interesting to see who takes over the job as Jena head coach. Officials didn’t name a reason as to why they mutually parted ways with Franz-Pohlmann so early on in the competition but it’s definitely not easy for the team to work and play in an anxious environment.

While central defender Babett Peter missed a penalty against FFC Frankfurt last week, she was now there to save her team and mark the important 2-1 lead against Borussia Mönchengladbach in the 80th minute. The Frauen-Bundesliga newcomer didn’t make it easy for Die Wölfinnen, who had to regain confidence after the bitter defeat against Turbine Potsdam. Things started well for the guests as the Hungarian international Zsanett Jakabfi collected her third goal of the season in the 26th minute. Ralf Kellermann had to made a few changes because Lena Goeßling and Sara Björk Gunnarsdóttir were unable to compete. French midfielder Élise Bussaglia finally started and played again. Wolfsburg had plenty of chances to increase the lead, but couldn’t do so. Their conversion of chances is still an issue and almost resulted in dropping points again. Madeline Gier took a cross-volley and marked the temporary equalizer for the hosts. A draw against the treble winners of 2013 would have been a sensation for the young team, but Wolfsburg managed to fight back. Peter put her team back up with a header after a lovely shot Bussaglia free kick. I’ve criticized Wolfsburg’s standards often. They are not dangerous enough. Bussaglia’s standards are usually very strong yet she doesn’t get a lot of playing time anymore. The duo of Goeßling and Gunnarsdóttir works well together and is successful, but perhaps it’s time to eventually try out new combinations in the future. I’d love to see Bussaglia alongside Gunnarsdóttir, for example.