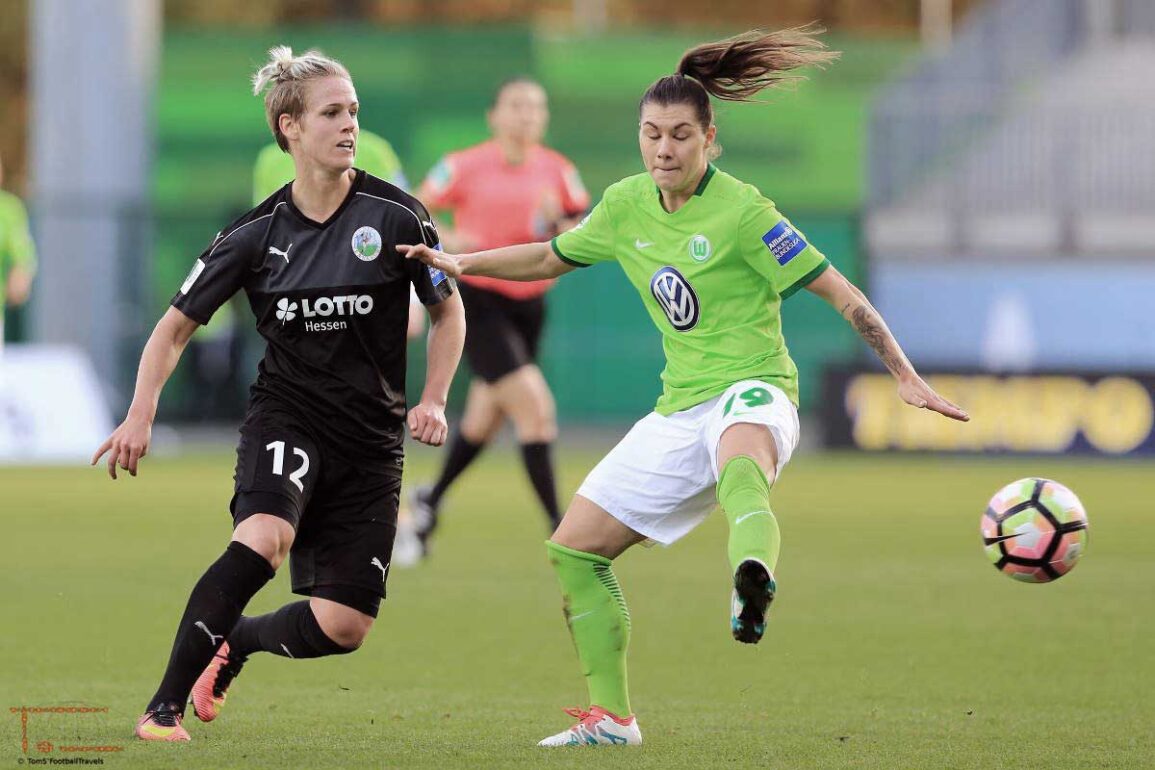 Two top fixtures on game day 6 of the Allianz Frauen-Bundesliga. SC Freiburg hosted Turbine Potsdam while VfL Wolfsburg welcomed FFC Frankfurt. Some surprising results! The Bundesliga stays as exciting and unpredictable as ever.

An outstanding performance by German international Lina Magull helped SC Freiburg overcome “Spitzenreiter” Turbine Potsdam with a 2-1 win. The midfielder scored a brace and collected her second and third goal of the season. It was Potsdam’s first loss of the season while Jens Scheuer’s team remains unbeaten in the Frauen-Bundesliga. Turbine’s Elise Kellond-Knight shortened the result in the 80th minute, but it was too late. A strong victory for Freiburg, which had to compensate for the losses of Hasret Kayikçi and Lena Petermann among other players. Matthias Rudolph’s team started in full attacking mode and forced Freiburg to fight against it and defend. It took them a little while to become more confident and play more freely and despite Potsdam being the dominant team, Freiburg took the lead. It was the individual quality that showed again with Magull marking the 1-0 lead from short distance. Scheuer let Magull play up front and it was a change that paid off; the loanee from VfL Wolfsburg extended Freiburg’s lead in the 50th minute after converting a beautiful free kick right into the net. No chance for the 24-year-old Lisa Schmitz to make a save.

Laura Benkarth on the other side played a very strong game, neutralizing most of Potsdam’s chances. Except Kellond-Knight’s goal close to end of the game. The Australian international has become one of Potsdam’s ultimate key players and has received a lot of attention recently for her beautiful free kicks. It’s a good thing for the Bundesliga legend, though. While other teams struggle with standards, Potsdam have a strong weapon ready with Kellond-Knight.

Second win of the season for Hoffenheim thanks to a goal by Fabienne Dongus in the 66th minute. The action mostly happened in midfield in a bumpy game. Hoffenheim played way too hectic at times while Leverkusen couldn’t bring out any main points offensively. Not a lot of chances during the first half. Dongus’ goal lived up the game and made it a little more exciting again, but Hoffenheim managed to keep the result and bring home three important points.

Many people expected this to be an easy task for current Bundesliga champions Bayern Munich, but it turned out to be the total opposite. Promoted MSV Duisburg certainly didn’t make it easy for Bayern even though the result might make it look otherwise. It took Bayern 43 minutes until Dutch forward Vivianne Miedema finally marked the 1-0 lead after a nice cross by Verena Faißt. But a courageous and dedicated Duisburg side managed to fight back and shocked Bayern by equalizing shortly after the second half started. Duisburg’s Lara Heß took advantage of a ball loss by central defender Carina Wenninger in the 52th minute and pushed the ball into the right corner. Gina Lewandowski and FIFA’s The Best Women’s Player 2016 contender Melanie Behringer ruined Duisburg’s possible chances of stealing a point and helped Bayern win, 3-1. MSV coach Inka Grings didn’t blame her team, though, and pointed out that she is very proud of how well and courageous they performed. While the club can take a lot of positives from the performance, there’s one more name to add to the injury list. Sofia Nati twisted her knee and will definitely not be available for the clash against SC Sand this coming weekend.

Borussia Mönchengladbach are still waiting for their first three points, or just a simple point, this season after falling short to FF USV Jena. Amber Hearn scored the only goal of the game in the 22nd minute. It was also Jena’s first goal in front of their own fans. Just a couple of minutes later, Gladbach forward Kelly Simons won a running duel against Susann Utes and managed a shot on goal but the ball hit the post after she nutmegged Jena goalkeeper Kathrin Längert. Simons was very active and present during the second half, generating a slight advantage for the guests who couldn’t make use of their chances though. Jena were also a bit lucky this time because Tiffany Cameron’s shot in the 57th minute also hit the post of the goal. Mönchengladbach were able to put a lot of pressure on Jena in the second half. While Jena dominated the first one, Gladbach took over the second one. Unfortunately, Gladbach couldn’t take any points home with them.

A busy schedule for Die Wölfinnen. Hosting FFC Frankfurt and Turbine Potsdam in the AOK Stadion within four days! Their aim is to claim the Bundesliga title this season and if you want to do so, you’ve got to beat everyone. Ralf Kellermann’s team dropped important points against Frankfurt. After 90 minutes, it was 0-0. Wolfsburg were the dominant team throughout the whole game but failed to make use of their chances. The green side had quite a few promising chances while chances for Frankfurt were rare. Peggy Nietgen caused a penalty by taking down Caroline Graham Hansen but Babett Peter hit the ball past the goal in the 55th minute. A crowd of 2,006 didn’t get to see a pretty game. But a game doesn’t need to be pretty, right? It needs to be effective. And Kellermann’s team still seems to be lacking exactly that. Matt Ross’ team focused on defending and waited for possible counter attacks, which made it hard for Wolfsburg. Frankfurt had all their players in their own half with Yuki Ogimi positioning at the central line. Swiss international Ramona Bachmann made her official comeback after injury alongside Anja Mittag but they weren’t able to make an impact. The treble winners of 2013 weren’t dangerous enough to land a lucky punch and score. Final passes were sloppy and wrong decisions were made. FFC Frankfurt went into the fixture as “outsiders” and are the real winners of the game. One point in Wolfsburg is more than they anticipated.

Another bummer for Wolfsburg despite the draw: Norwegian international Caroline Graham Hansen suffered a leg injury and will be out for the rest of the year. It’s a sad story considering she just returned from a long-term injury. Hansen is — without a doubt — one of the strongest individual players in the world when fit.

Two goals within two minutes. Lea Schüller for Essen in the 42nd minute and Dominika Skorvankova with the immediate answer for Sand the minute after. Once Schüller marked the lead after a wonderful Irini Ioannidou cross, Essen’s defense was too careless. They were still celebrating the lead while Skorvankova overcame German international Lisa Weiß. Essen weren’t able to find decent solutions against a solid Sand defense after that. Sand coach Colin Bell is happy with the point; his team fought well against the constant pressure of Essen which resulted in the blues mostly standing defensively.