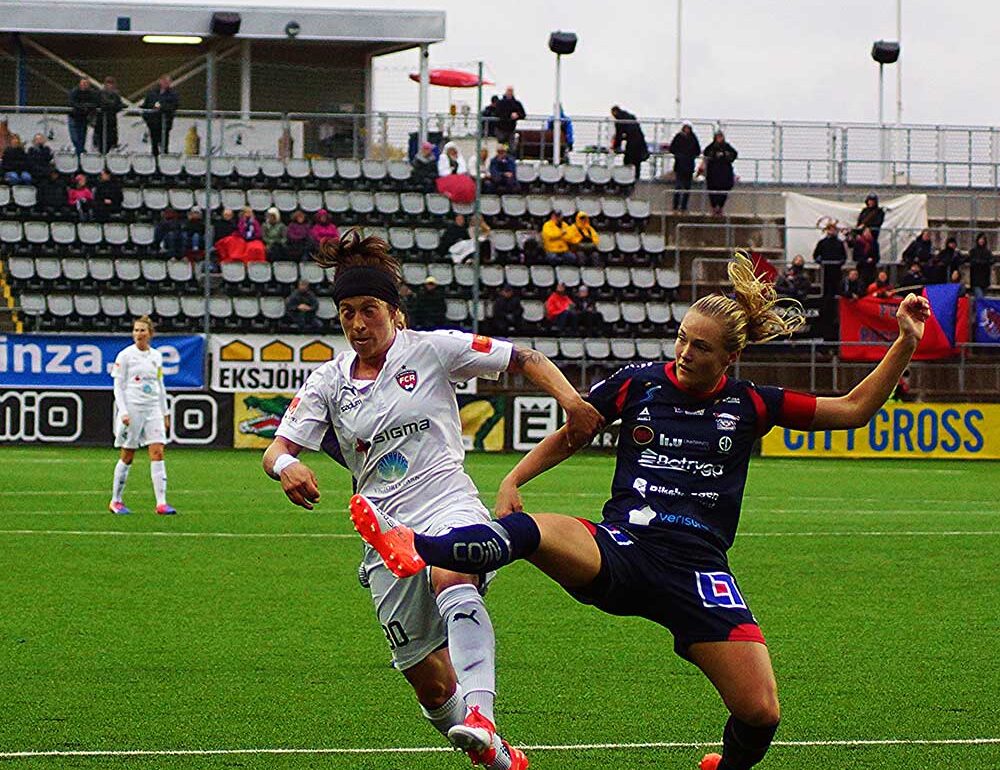 Damallsvenskan: Linköpings FC Closes in on Championship after 1-0 Win over FC Rosengård

Nine minutes before the end of a thrilling football match, Linköpings FC’s Pernille Harder sent a ball into FC Rosengård’s box. There, in between two defenders, Norwegian international Kristine Minde jumped up and headed the ball behind goalkeeper Zecira Musovic.

It was the decisive goal in a thrilling football game between the best two sides in Sweden and it was Minde’s most important goal ever, very likely having decided the championship in Linköpings’ (LFC) favor.

Weather conditions could have been more friendly for the match that players and fans had been looking forward to for so long now. It was chilly and gray and after the first half hour a drizzling rain set in and would not stop until after the game.

However, 6,200 people attended the game, Linköpings’ best attendance number in Linköping Arena, which was originally opened for the 2013 Euros. Additionally, approximately 314,000 watched the only live broadcast of a league game on state-owned channel SVT1 this year. 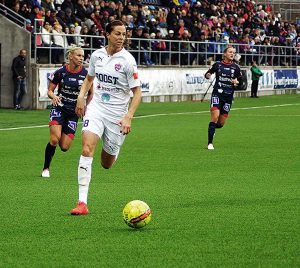 Rosengård had to start without their creative Dutch midfielder Lieke Martens, who was injured in the first Champions League game in Iceland last week. The reigning champions from southern Sweden started spectacular in the first four minutes, putting pressure on the home side, but that starting pressure was short-lived and Linköpings hit back directly. It was a game of defense with not too many chances on either side, but still a game played at a very high level, fun to watch, and dramatic until the end.

Linköping’s Dutch midfielder Renée Slegers and defender Jessica Samuelsson took mostly good care of Marta in the first half. For the other side, Rosengård fullbacks Amanda Ilestedt and Emma Berglund matched up well with young forward Stina Blackstenius.

Over 90 minutes, the best player on the pitch was Portuguese international Cláudia Neto, who controlled the speed of play in LFC’s midfield and sent amazing passes to the right and left. Neto came to the Damallsvenskan in 2014 from Spanish side RCD Espanyol of the Primera División and has become one of the leading midfielders in the league.

The other dominant player (and MVP from last season) is the aforementioned Danish midfielder/forward Harder. She is involved in most of LFC’s offensive achievement. Her contract expires in a few weeks and many top clubs in Europe are keen to sign her. Harder herself has said she would prefer Germany’s Frauen-Bundesliga if she leaves — that would probably mean VfL Wolfsburg or Bayern Munich.

After the first six minutes of the second half, Lotta Schelin had to be subbed out for Rosengård. She was replaced by Ebba Wieder, a talented teenager. Head coach Jack Majgaard Jensen sent Wieder into the midfield and Marta up front to replace Schelin.

Ten minutes later it was clear, at least on this day, that Linköpings had better alternatives on the bench. Team manager Martin Sjögren sent Fridolina Rolfö on for Blackstenius who had been unsuccessful in breaking through Rosengård’s strong defense. Rolfö, a strong 23-year-old target forward, had been injured in the Rio 2016 Olympics and has been out for several weeks and was warmly welcomed by the audience.

In the last 15 minutes, it looked as if Linköpings was tiring whereas Rosengård seemed to have more to give. A goal after 81 minutes, however, changed everything and gave Linköpings the energy to defend until referee Pernilla Larsson blew the final whistle. Marta had two good attempts on goal, though, hitting the crossbar once, but Linköpings defended well.

The victory gives Linköpings now a five-point lead with three games to go. They travel to Vittsjö and Mallbacken and has Eskilstuna at home. Rosengård’s schedule looks more difficult with Eskilstuna and Mallbacken at home, but with strong Piteå away.

After the game, I spoke to Ella Masar McLeod who said she hoped sponsors had seen this incredible game and would invest more money into the teams so the players would be able to stay and the competition in the league would continue to grow.

Minde was very happy about her goal and said the result puts Linköpings in a very good position to take the league title. She said it was unusual for her to score on such a header, and refused to acknowledge whether this game in effect has decided this year’s championship.

“We will celebrate tonight and tomorrow, but we have three difficult games to focus on.”

Linköpings’ coach Martin Sjögren told Corren, the local newspaper, he would be honored if the Swedish Football Association would ask him to be Pia Sundhage’s successor in coaching the national team. Sundhage has recently signed another one-year contract with both sides stating she will leave after December 31, 2017. The federation has announced it will announce Sundhage’s successor in the spring of next year. Sjögren is, for many people (myself included), the best choice for the job.

The day after the game, rumors emerged that LFC is interested in Kvarnsvedens IK’s forward Tabitha Chawinga. The 20-year-old from Malawi came to Sweden when a lower-ranked Swedish soccer side visited Malawi and played against Chawinga’s team. They strongly recommended her to a third division team (“we have never seen a player like that”), which actually signed the then 17-year-old. Since then, Chawinga has scored, scored, and scored. She moved to Kvarnsvedens in the Elitettan (second division) where she scored 45 goals in 26 matches last season. This year, Chawinga has 12 goals in the highest league in her account and plays for a team that has struggled at times to maintain its spot in the first division.