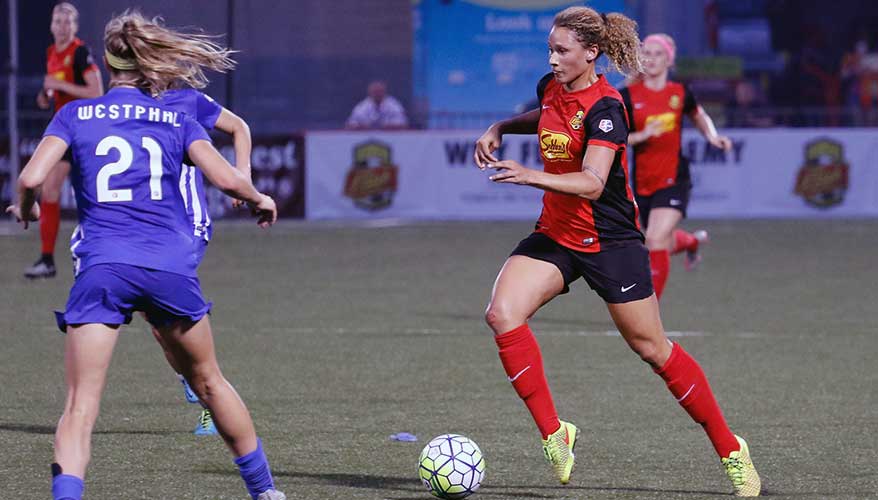 The National Women’s Soccer League (NWSL) has announced its season-ending awards for the 2016 season. Western New York Flash forward Lynn Williams took home the NWSL Golden Boot as well as the Most Valuable Player award for her 11-goal, 5-assist performance this season.

Each season, the NWSL announces the following awards:

Voting consists of two rounds: the preliminary that narrows down the finalists and the final round, which includes fan voting.

Forward Lynn Williams was awarded the 2016 NWSL Golden Boot, given to the player with the most goals in the regular season.

Williams tallied 11 goals, tying with the Houston Dash’s Kealia Ohai for most goals in the regular season, but dished out five assists to Ohai’s four to take the award on the assist tie breaker.

Raquel Rodriguez, out of Penn State, was voted the 2016 NWSL Rookie of the Year. In 18 appearances for Sky Blue FC, Rodriquez scored one goal and garnered one assist for the New Jersey-based team. Sky Blue finished its fourth season in NWSL with a 7-8-5 record, finishing in seventh place.

Mark Parsons was named 2016 Coach of the Year after leading the Portland Thorns FC to a 12-3-5 record and the team’s first NWSL Shield. In addition, Parsons helped the team return to the league playoffs after it failed to qualify for postseason play in 2015.

Parsons joined the thorns after coaching the Washington Spirit for three seasons. In 2014 and 2015, he led the Spirit to two straight playoff appearances.

2016 Goalkeeper of the Year

Ashlyn Harris is the 2016 Goalkeeper of the Year. The Pride keeper appeared in 15 matches for the expansion team and recorded four shutouts. Harris made 62 saves while posting a 1.33 goals-against-average (GAA) in 2016.

Harris garnered nine NWSL Save of the Week awards, voted on by the fans, in 2016.

Lauren Barnes was named Defender of the Year, breaking Becky Sauerbrunn’s three-year reign as holder of the award. Barnes started every game for the Reign, and played all but 15 minutes of the season as she helped the team earn eight clean sheets.

The Reign were the No. 4 defense in the league in 2016, allowing 21 goals through 20 games and garnering five straight shutouts, including a streak that went to 531 minutes without conceding a goal.

Since its inception in 2013, Barnes becomes only the second player to win the award, with FC Kansas City’s Becky Sauerbrunn winning the award from 2013 to 2015.

Lynn Williams was voted the league’s Most Valuable Player for her 11-goal season in which she helped lead the Flash to the playoffs and an appearance in the league final. In addition to winning the NWSL Golden Boot, Williams racked up five assists in 19 appearances for the club.

This season’s Best XI features three Portland Thorns, the most represented team. The Red Stars and Flash follow with two selections each. In total, seven players are first-time honorees.

Becky Sauerbrunn was named to her fourth straight Best XI squad while Lauren Barnes, Allie Long, and Christen Press are repeat selections from 2015.

Lynn Williams and Jessica McDonald will both feature in the league final for the Flash as they take on the Washington Spirit on Sunday, October 9.

The Second XI is made up of the next leading vote getters at each position not named to the Best XI.

Ali Krieger and Crystal Dunn will lead the Washington Spirit against the Western New York Flash in the league final on October 9.