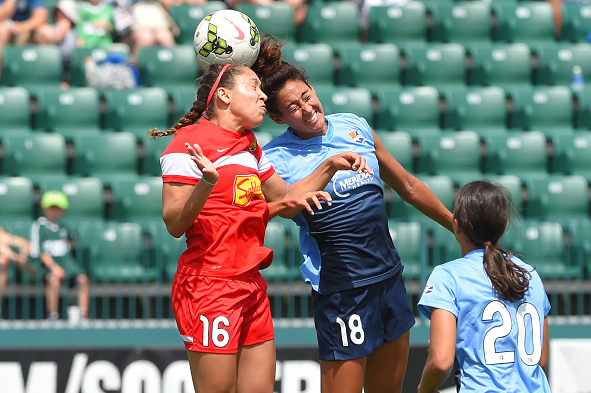 The Western New York Flash found out firsthand what a challenge it is to find replacements for losing one of the best players in the world and one of the most iconic players in women’s soccer. In 2015, Carli Lloyd was traded to the Houston Dash in the offseason, while Abby Wambach announced she would not play club soccer in 2015 and nearly every piece of the 2013 Supporters Shield side departed Rochester. Sydney Leroux played just three matches for the Flash in 2015 and never looked to fit in with the team. So Aaran Lines and Co. had to work through the campaign with one of the youngest teams in the league’s short history. Granted, the Flash did have a plethora of 2015 first-round draft picks at their disposal, including now U.S. Women’s National Team camp regulars Samantha Mewis and Jaelene Hinkle. But inexperience in the professional game showed and Western New York limped to a second consecutive seventh-placed finish in the standings.

Naturally there would be changes in a team that finished in the lower third of the standings and the Flash have made many changes in the offseason. The team retains nine players, with the majority of them being part of the youth core that was built last season, and released, traded, or saw the retirements of 11 players, including the likes of Whitney Engen, Becky Edwards, and Jasmyne Spencer. Western New York put together another strong draft class as they picked up a forward with a nose for the goal in Virginia’s Makenzy Doniak and the goalkeeper for national championship-winning Penn State, Britt Eckerstrom. There is also an international flair for the team as New Zealand’s Abby Erceg and Canada’s Adriana Leon came over in a trade from Chicago for Engen, and the team signed Jeon Ga-eul, the league’s first player from South Korea.

The one constant of the Flash’s lineup is that from top-to-bottom, they may be the fastest team in the NWSL. The forward ranks see co-leading goal scorer Lynn Williams return to pair up with Leon and veteran-newcomer Jessica McDonald, all being speed merchants who can beat any defender for pace. With goal-scoring production being a trouble spot for the Flash forwards last year, if that trio can work well with Doniak, they could bag a few goals. Mewis returns in the midfield and brings her savvy technical skills to the table with the ability to score from set pieces and from distance. The defense sees Abby Dahlkemper move back into a central defensive role and should partner well with Erceg. Hinkle will provide speed and width again on the flank and expect production out of Australian international Alanna Kennedy as well.

The only head coach the Flash ever knew in Aaran Lines stepped down in the offseason to become the club’s vice president. And did somebody say that this is a fast team? Well, yes. And that means Paul Riley comes running. The coach who loves to attack joins Western New York after two seasons with the Portland Thorns. Riley made the playoffs in his first season at the helm in 2014 but finished in a distant sixth place in 2015 and wasn’t retained by the Thorns. He will have less of a gap to fill with the Flash during the Olympics unlike last season during the Women’s World Cup and he has a younger group to mold as well. Can speed and intensity wear down opposition on one of the largest fields (Sahlen’s Stadium) in the NWSL? It will be something to keep an eye on for sure.

Goalkeeping is certainly an it-factor for this team, and in fairness, it’s been a trouble spot since the inaugural NWSL campaign when Adrianna Franch was holding down the fort. Sabrina D’Angelo returns after missing the latter half of the season with an injury but potentially becoming the Canadian No. 2 keeper for the Olympics will give her some motivation in the early months of the season. Eckerstrom is the other rostered goalkeeper and was good for Penn State. And there will be little doubt that she will be called upon at some point in the season with D’Angelo potentially making the Olympic team. The Flash conceded the second most goals in the league last year (34) while scoring on average slightly more than one goal per game. It’s a hard ask to win every match 1-nil but if the goals start flowing in from the forwards and the keepers put in a couple good shifts, there is no reason why the Flash can’t have a good 2016 season.