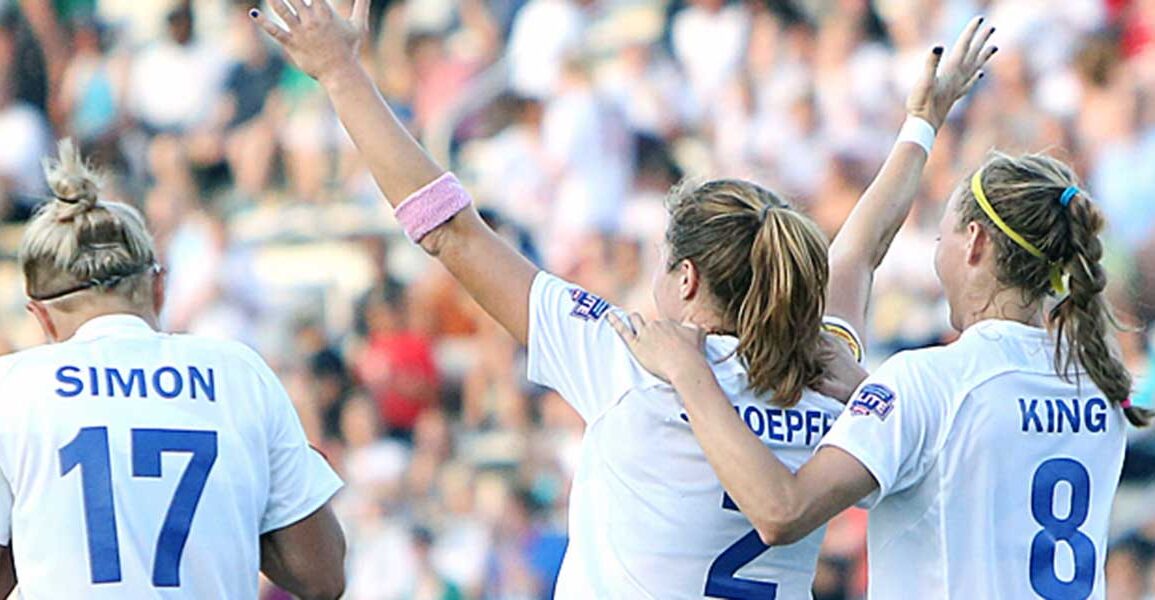 The 2015 Boston Breakers story was a tale of two halves. The pre-World Cup portion of the season netted the Breakers a 3-3-2 record, a perfect home record, and featured an on-form Kristie Mewis, who scored the game-winning goals over Portland and Kansas City. The post-World Cup portion of the season not so much: eight matches without a win, a glaring lack of a proven goal scorer, and a defense that left goalkeeper Alyssa Naeher exposed far too often. Despite Naeher‘s shot-stopping ability, which often kept the team in every match, the lack of cohesion in defense and a shortage of goals saw the losses pile up. Other than Naeher, one of the few bright spots from 2015 was the play of rookie forward Stephanie McCaffrey. The former Boston College striker scored three goals and garnered six caps with the U.S. Women’s National Team (USWNT) during its post-World Cup Victory Tour.

The Breakers spent the offseason overhauling the roster, as seven different players who featured in 10 or more games are no longer with the team. None more so important than the departure of Alyssa Naeher, who was traded to the Chicago Red Stars. Naeher had two stints with the Breakers, one in the Women’s Professional Soccer (WPS) days and returned in the middle of the 2013 season, and her stellar play over the past two seasons vaulted her onto the USWNT. Also gone are midfield mainstays Maddy Evans and Amy Barczuk: the Orlando Pride selected Evans in the NWSL Expansion Draft and Barczuk retired in February. Eight new players were brought in for 2016, including recent signing Christen Westphal, the third overall pick in the 2016 NWSL College Draft, and veteran defender Whitney Engen, who was acquired from Chicago in the Naeher trade.

Nearly every year, the Breakers, on paper at least, have good depth in every position. But that depth has hardly translated into results on the field, and more importantly for Breakers fans, making the postseason. This year, the Breakers seem to have the right mixture of veterans and up-and-comers to make things happen.

The midfield saw the largest overhaul in the offseason as only Mewis and Morgan Marlborough return. League veterans Sinead Farrelly, McCall Zerboni, and Angela Salem come to Boston, and join former Liverpool Ladies midfield dynamo Louise Schillgard. Schillgard — who scored nine goals, including the FA Women’s Super League title-clinching goal in 2013 — will be the most interesting to follow as she joins former Liverpool teammates Libby Stout and Engen and new head coach Matt Beard in Boston. Stout, who put together a nice résumé with Liverpool over the past few seasons after an impressive collegiate career at Western Kentucky, joins 2016 NWSL Draft pick Abby Smith in the battle for the top goalkeeping spot.

In defense, the big question will be who is going to rise to the challenge at the center back position after the Breakers allowed a league-worst 43 goals in 2015. Engen could be part of the answer but she may not be available for the full season because of national team duty during the Olympics. Regardless, which center back pairing emerges will have a lot of work to do to help the Breakers change course and improve on a dismal 2015 season.

Tom Durkin, after going 10-29-6 in two seasons at the helm of the Breakers, departed in favor of former Liverpool Ladies manager Matt Beard. Beard has a proven track record, leading Liverpool to a pair of FA WSL titles in 2013 and 2014, along with an FA Cup Finals appearances in 2012. But after a seventh-place finish in the FA WSL last season, he left the club to come to Boston. Beard faces a situation in Boston similar to Liverpool: Build a lower-end table club into a title-contender.

Goals. Where are they going to come from? After an early start in 2015, McCaffrey didn’t see her name often on the scoresheet and neither did Mewis for that matter. If McCaffrey has a blistering early season and USWNT head coach Jill Ellis is true to her word about league play making a difference in Olympic team selection, the Breakers could lose her for USWNT duty. And Mewis, while a striker in her college days, plays more of an attacking midfield role. Kyah Simon will be available for the beginning of the season but miss a portion of the season with Australia during the Olympics.

Will this be the year in which Morgan Marlborough breaks out? Perhaps goals will come from Stephanie Verdoia, who saw limited minutes in her rookie campaign last year? However the goals come, come they must if the Breakers want to be successful this year