NWSL College Draft 2016: Some of the Best of the Rest 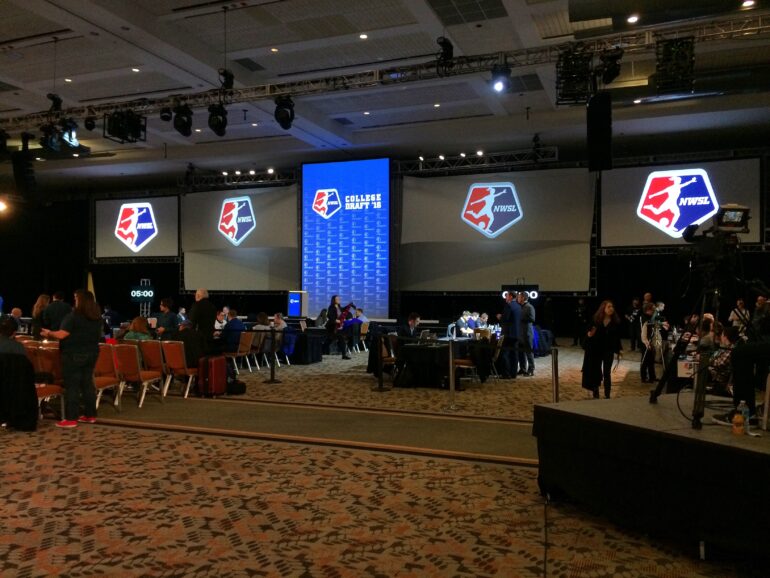 Currently, there can only be 40 players selected at the National Women’s Soccer League (NWSL) College Draft, so some great young talent slips through the cracks each year. Many players who choose to continue playing will have to rely on invitations to preseason camps or open tryouts in order to attempt to make an impression on coaches and sign with a team. By no means are these all lesser players; in fact, in this year’s class, quite a few players didn’t hear their names called when they probably could have been a solid late second- or third-rounder.

With Makenzy Doniak’s fall down the draft board and a couple of picks who weren’t on the preliminary list of players who declared, there were several players I thought would be a surefire pick not cutting it. Here’s the best of the rest and should absolutely get a shot at a team’s preseason camp.

Teams that can use forward depth:

Taylor Smith, UCLA
Smith has been a dynamo for some really excellent Bruins teams, but was also a bit of a mess for this past year’s struggling squad so it’s hard to know which version you would see at the professional level. But hey, that’s why you give players a chance in camp. Perhaps Smith fell off the board because of her inconsistent senior season or because she gave Katie Bowen a bit of a punch to the stomach last season — she’s still a talent who could add something off the bench for an NWSL squad. Speed is the name of Smith’s game, and she can fly past defenders with the ball at her feet. Smith had excellent productivity and efficiency in her first two seasons, so if she can recapture that form, she could be a real diamond in the rough for some team.

Kailey Utley, West Virginia
Unlike Smith, Utley is a player who came on a bit later in her career and ended things with a really strong senior campaign for a West Virginia squad that fared quite well in 2015. Utley could have been a real steal in the fourth round but considering the Red Stars had almost every fourth-round pick and generally stuck with forwards who had featured for their reserves squad, she just wasn’t going to make the cut in this draft. Utley stepped up her game to become one of the main attacking options for the Mountaineers this past season. Her goal total more than doubled from her junior season, and several times this past season she delivered for her team during crunch time, showing she can be a clutch player when called upon.

Teams that can use midfield depth:

Liana Salazar, Kansas
Salazar and her Jayhawks were flying high two years ago, with a seemingly out of nowhere campaign that both shocked and delighted NCAA fans. Things were a different story this year, as the Jayhawks returned to the form of previous years and Salazar didn’t have the senior season a potential NWSL draft pick wants to have. She probably wasn’t taken due to the fact she would gobble up a team’s precious international spot, and fer fellow Colombian countrywomen haven’t exactly fared well in the league. Salazar reads the game well and is an attacking midfielder who can, on occasion, create something out of almost nothing with her technical skill.

Nicole Waters, Dayton
Waters is a player who could have been a solid third- or fourth-round pick but for some reason, didn’t get the call on draft day. I’m not sure what turned teams off on Waters, but her international status probably worked against her on this one. She could be a player who features for the Canadian Women’s National Team in the future, and looking at Canada’s current list of allocated players, I think there’s a chance she could be on that list because the midfield pool isn’t the most electrifying. Waters isn’t much of a scorer in her own right, but she can make a shot on occasion and really is an excellent taker of free kicks. What jumps out about Waters is her vision and ability to read the game. Over the course of her career with the Flyers, Waters amassed 54 assists, becoming Dayton’s all-time assist leader and placing her at No. 20 on the list for most assists in Division 1 history (tied with Christie Rampone). In short, Waters knows how to set players up to score and possesses excellent passing range.

Kinley McNicoll, Wisconsin
Wisconsin’s season probably didn’t reach the heights that Badger fans wanted, and McNicoll’s draft status probably suffered thanks to it. McNicoll had put up an incredible junior campaign, but her senior season was more of the pedestrian variety. She’s another international (are you sensing a trend here?), so teams may have been wary to place their bets on a player who is technically currently trending down. That being said, while McNicoll played midfielder in college and showed some excellent vision and ability to provide service into the box on set pieces, she is versatile enough to suit up at outside back as she does for Canada. In short, McNicoll, has versatility, the ability to read the game, and great free-kick service. Almost any team would become better with McNicoll her on the roster.

Natalia Gomez-Junco, LSU
Gomez-Junco is the LSU player I thought most likely to come off the board in this draft over Catalina Rubiano and Alex Arlitt, however, Arlitt got the call thanks to her serious versatility. As for Gomez-Junco, she’s really only going to play in the middle of the park, but after a breakout senior year, there’s definite potential for this player. Since Mexico is no longer allocating players to the NWSL, I’m not sure there were a lot of teams chomping at the bit to spend an  international spot on Gomez-Junco. That being said, she’s a technically gifted player who can absolutely dazzle on the free kick. It seemed like every goal she scored off of a free kick this past season was worthy of the spot in the SportsCenter top 10 plays. I think there’s potential for Gomez-Junco as a creator in the center of the park, but there’s still some developing to do for the Mexican international.

Teams that can use defensive depth:

Georgia Kearney-Perry, St. John’s
While the new top 10 draft pick Rachel Daly was scoring goals by the bucket for the Red Storm, Kearney-Perry was holding down the fort for the back line. Her efforts earned her Big East Defensive Player of the Year twice, and she’s a solid center back who doesn’t have many flaws in her game. Once again, her international status probably worked against her, but there’s also probably quite a few teams calling from the FA Women’s Super League back home in England. That being said, teams in need of defenders will hardly do better in this draft class than taking a chance on the Brit as her ability to read the game, positioning savvy, and knowing when to make the all-important tackle is incredibly impressive.

Mary Kathryn Fiebernitz, Michigan State
I know what you’re thinking: “Michigan State!? They haven’t had a winning record since 2011, which is before Fiebernitz even got there!” And you would be right on both fronts, but behind all those terrible records, Fiebernitz is a good and dependable defender who could add to any team looking for defensive depth or even a spot starter here and there. The Spartans’ less than inspiring campaigns might have contributed to teams not wanting to take a chance, but make no mistake, Fiebernitz deserves a look. Her strength lies in her ability to win balls in the air, be that defensively or flying into the penalty box on a corner kick. She does well in keeping possession, goes forward when necessary, and makes the smart pass out of the back while not turning the ball over too often. Fiebernitz reads the game relatively well and can pull off the offside trap pretty consistently and intelligently.

Teams that could use keeper depth:

Kate Scheele, Colorado
Another player who didn’t benefit from a less-than-stellar senior campaign with her squad, having to split time with her heir apparent in order to help the team develop for next season after dubbing this one a lost cause. Take nothing away from Scheele, however, as she has still excelled even if the stats don’t seem to agree. She most likely wasn’t selected due to glut of keepers who declared for the draft (also, why spend a draft pick on one when you can just call them into camp instead?). Scheele does well reading crosses and coming off her line to stop 1v1 breakaways. She doesn’t have the strongest leg in the game, but does well enough to take the occasional long free kick outside of her box. Scheele’s not a superstar by any means, but she has a solid skill set that makes for a good backup keeper for seasons to come.

Sierra Bonham, North Dakota State
Considering roughly 150 players declared for a draft with 40 selections, there’s a chance you hadn’t heard of a lot of the player (heck, I hadn’t heard of some of them). All that aside, Bonham is probably one of the best players you hadn’t heard of until right now. A mid-major keeper who was a four-year starter for a Bison team that has been a Summit League contended for the past few years. Yet again international status strikes, as Bonham is a Canadian and not many teams would want to use a coveted international spot on a player who essentially boils down to a backup or a future prospect. Still, a solid and consistent keeper who has pretty good hands and can make a highlight reel save from time to time. Bonham reads the game well, but she sometimes struggles to make the easy save.