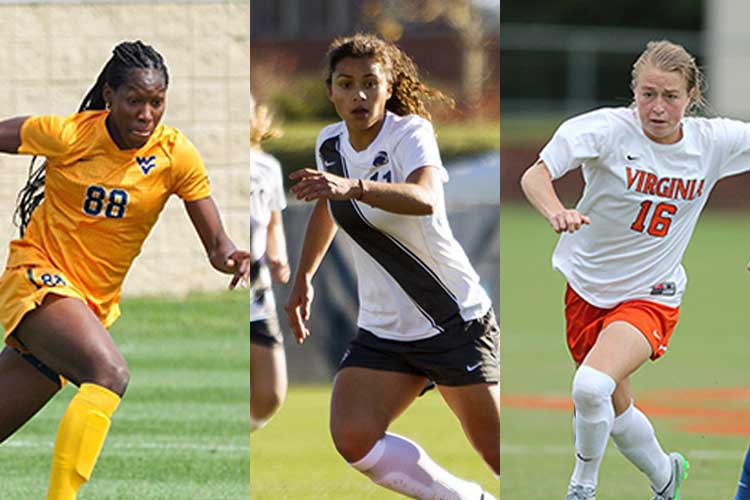 The MAC Hermann Trophy is awarded annually to the nation’s top college player. The winner will be announced on Friday, January 8, 2016.

Buchanan, a junior defender from Ontario, Canada, is the three-time reigning Big 12 Defensive Player of the Year and three-time All-American. She helped lead West Virginia to the Elite Eight. She was named to the Big 12 All-Academic Second Team. Buchanan started all five of Canada’s matches at the 2015 FIFA World Cup and was named Best Young Player as well as to the FIFA All-Star Squad.

Rodriquez, a senior midfielder from San Jose, Costa Rica, is an All-American who started all 27 matches for Penn State. Rodriguez scored the game-winning goal in Penn State’s 1-0 win over Duke in the final of the College Cup and was named to the All-Tournament Team. She was named to the College Sports Information of America Academic All-District Two first team. Internationally, Rodriquez scored Costa Rica’s first goal in a Women’s World Cup at the 2015 World Cup, becoming the first Nittany Lion to score in a World Cup.

Sonnett, a senior defender from Marietta, Georgia, is the ACC Defensive Player of the Year and named espnW’s Player of the Year. The two-time All-American helped Virginia record 15 shutouts this season and was key in a Virginia defense that allowed only 12 goals on the season. Sonnett received her first cap with the senior U.S. Women’s National Team on October 25, 2015.