Teams walking out before the match in Moncton.

Starting lineup for France against England in the opening match of Group F during the 2015 FIFA Women's World Cup in Canada.

Starting lineup for England against France in the opening match of Group F during the 2015 FIFA Women's World Cup in Canada.

England before the match.

Group F action between England and France at the 2015 Women's World Cup.

Elodie Thomis and Claire Rafferty (3) battle for the ball.

Eniola Aluko and Louisa Nécib (14) during an opening-round match at the 2015 Women's World Cup in Moncton, New Brunswick.

France celebrates after Eugénie Le Sommer scored in the 28th minute in a Group F opening-round match in Moncton.

Ellen White (23) heads the ball away during the first half against France in Moncton, New Brunswick.

England's Jill Scott controls the ball during a match in group play at the 2015 FIFA Women's World Cup in Canada.

The French team acknowledging their supporters after the game. 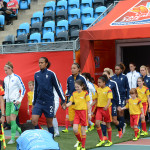 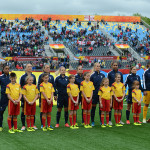 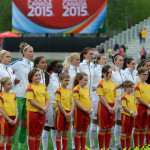 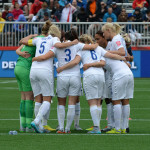 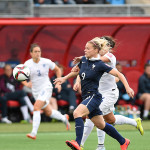 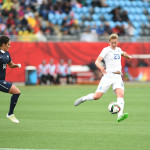 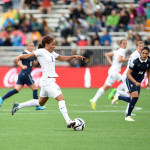 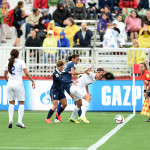 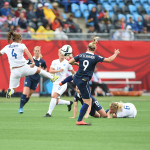 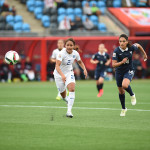 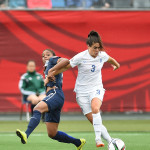 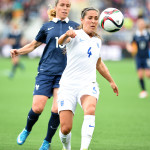 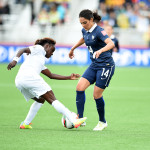 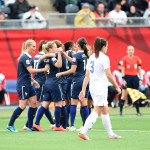 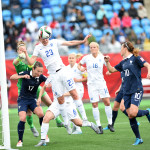 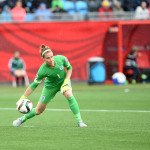 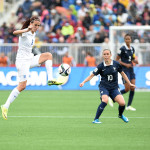 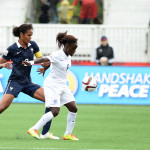 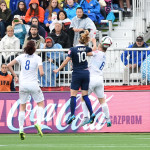 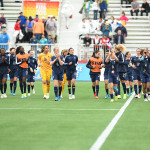 France Opens Group Play with a 1-0 Win over England

On a wet and windy afternoon in Moncton, New Brunswick, Eugénie Le Sommer’s 29th minute goal was enough to give France a victory over England in Group F’s opening match of the 2015 FIFA Women’s World Cup in Canada. England started out the match with a defensive focus, sometimes with 11 players dropping back behind the ball.

Down a goal, became more forward-minded, but not by much, still allowing France space. England managed three shots (one on goal) on forays in the French half while France finished with 16 shots, four on target.

The match was not without a bit of controversy. In the 69th minute, England’s Laura Bassett went down in front of goal after a Camille Abily elbow to the face. The cards stayed in the ref’s pocket.

Asked about it after the game, England head coach Mark Sampson said:

“We were told before the tournament that we would be protected if we abided within the rules and I think we’ve been let down with that one.”

Sampson hinted at putting a more attacking side on the field for England in the match against Mexico.

“Watch the Mexico game, we’ll see which England comes out then.”

England will next face  Mexico on June 13. Mexico picked up a point after a 1-1 draw with Colombia. Verónica Pérez scored for El Tri in the 36th minute.

Next for France is Colombia, which drew with Mexico, 1-1, after getting a late equalizer from Daniela Montoya.

All images courtesy of Cynthia Hobgood.

Cynthia Hobgood is a Washington, DC-based digital communications consultant, photographer and writer. Hobgood started covering soccer as a journalist in 2000 for weekly/daily publications and ultimately, the Associated Press (while also covering other pro and NCAA sports primarily in the DC area.) She previously helped launch a national youth sports nonprofit and started Full 90 Communications earlier this year. Hobgood has a master’s degree in sports management from The George Washington University School of Business and master of arts degree in English from Baylor University.