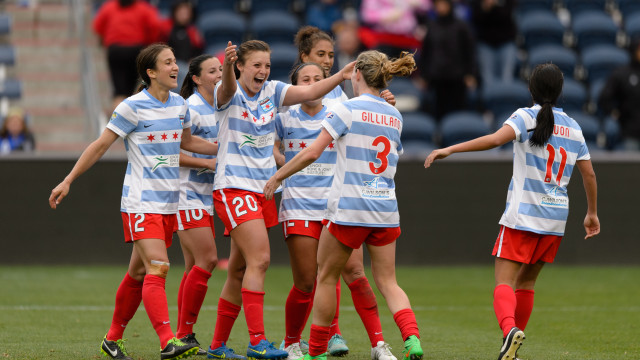 The Chicago Red Stars defeated league leaders the North Carolina Courage, 3-2, for the second time in seven days this season at Toyota Park in Bridgeview, Illinois. The Courage remain atop of the National Women’s Soccer League (NWSL) table but the Red Stars move within two points of the leaders with the win.

The game marked North Carolina’s the third game in seven days, and head coach Paul Riley elected to start Taylor Smith and Yuri Kawamura in the midfield with regular starters Debinha and Jessica McDonald on the bench to start the game.

Chicago’s first good look came in the 5th minute when a Julie Ertz pass split North Carolina’s center backs and put Christen Press in on goal. Press’ placement shot didn’t quite have enough to dip and just missed the crossbar.

North Carolina had a chance in the 20th minute after Mautz gave the ball away to Lynn Williams in the box. Williams’ shot missed wide of the far post.

Danny Colaprico put Chicago up 1-0 in the 27th minute off a play started by Vanessa DiBernardo. Press got a foot on the cross into the box and softly settled it down and left it off for Colaprico. Colaprico did well to beat the Courage defender to the ball, control the ball with her right foot and use her left foot to send the ball past goalkeeper Sabrina D’Angelo to the far post.

The Courage had to use an early sub to bring on Debinha for an injured Kawamura in the 32nd minute. Kawamura had to helped off the field after a collision with Mautz. The Japanese international has been a strong addition to the Courage squad with her ability to play in defense and the midfield.

Chicago’s second goal came in the 54th minute and started off a corner kick. Second-half substitute Debinha headed Carolina’s clearance but not far enough out of danger. The ball fell to Press, who played it back into the box. Alyssa Mautz was there to head it past D’Angelo to put the Red Stars up, 2-1.

The Red Stars added another goal four minutes later. Ertz’s inital shot was blocked and DiBernardo was at the top of the box to settle the rebound and send a left-footed shot past D’Angelo at the near post.

Colaprico made a goal-line clearance in the 74th minute to keep the Red Stars’ two-goal lead.

Nothing could keep a gorgeous Debinha free kick from reaching the back of the net in the 82nd minute. A handball outside of the box gave the Courage an opportunity to cut the Red Stars’ lead to one. Debinha curled a right-footed shot over the wall and into the upper 90.

The Courage became even more direct to push for the equalizer. Two free kicks in the final 10 minutes failed to produce any strong chances for North Carolina as Chicago’s defensive shape held and withstood the pressure. North Carolina, with its numbers forward, was almost caught on the counter but Taylor Smith cut off Press who had the ball and space on a break to stifle the threat.

With the win, Chicago improves to 4-2-1 and 13 points, two behind North Carolina’s 15 points. North Carolina remains in the top spot but now has dropped two games in the last seven days.

The win keeps Chicago undefeated at home this season with three wins and a draw.

Debinha’s goal was her third of the season and ties her with Lynn Williams. Abby Erceg scored her first goal of the season; the assist was Sam Mewis’ first of the season.